Statue of boy pointing toward Binnenhof

Are you curious about the bronze statue of a boy near the Hofvijver and why he is pointing his gold finger toward the Binnenhof? Read on to find out about the Dutch ‘Jantje’…

Next to the Hofvijver (pond) in The Hague city center is a bronze statue of a young boy on a pedestal. On his arm he is carrying a basket while on his head is a hat with a large feather. His hand is outstretched, and he is pointing toward the Binnenhof (Parliament) building.

There is an old Dutch children’s song about The Hague and Jantje features in it. It says if you ask Jantje where his daddy lives, he will point with his little finger.

The real Jan (John) was born in 1284, raised in England in the court of King Edward I and married Edward’s daughter, Eleanor of Castille, in 1297. Meanwhile, back in Holland, his father, Count Floris V had been murdered the year before, in 1296.

Young John was allowed to return to Holland in 1298 as Count of Holland. But only a year later, he died while in Haarlem. Although the cause was recorded as dysentery, some suspect he may have been poisoned by those involved in his father’s murder. Because he had no children and his male siblings had all died at an early age, the county of Holland passed to his father’s cousins and the House of Hainaut.

The statue itself was created in 1976 by sculptor Ivo Coljé. Recently, a short circular stone wall has been added in front of the Jantje statue giving it a grander presence. Etched into the stone on the front are the words of the Haags Jantje song. 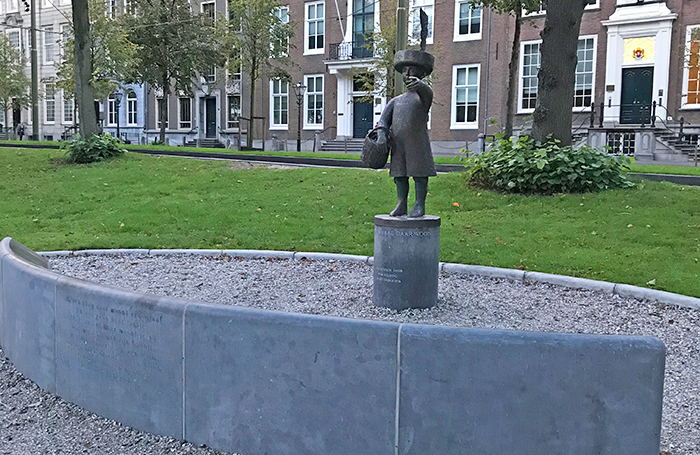 ADELAIDE OF HOLLAND, COUNTESS OF HAINUT