An audience can tell when the play’s about to start in a theatre because the lights dim and everything goes dark. Usually you can still make out a fair bit around you, but when the lights go down at the beginning of The Pillowman we are plunged into pitch black, and absolutely nothing in the auditorium is visible save a dimly glowing EXIT sign. 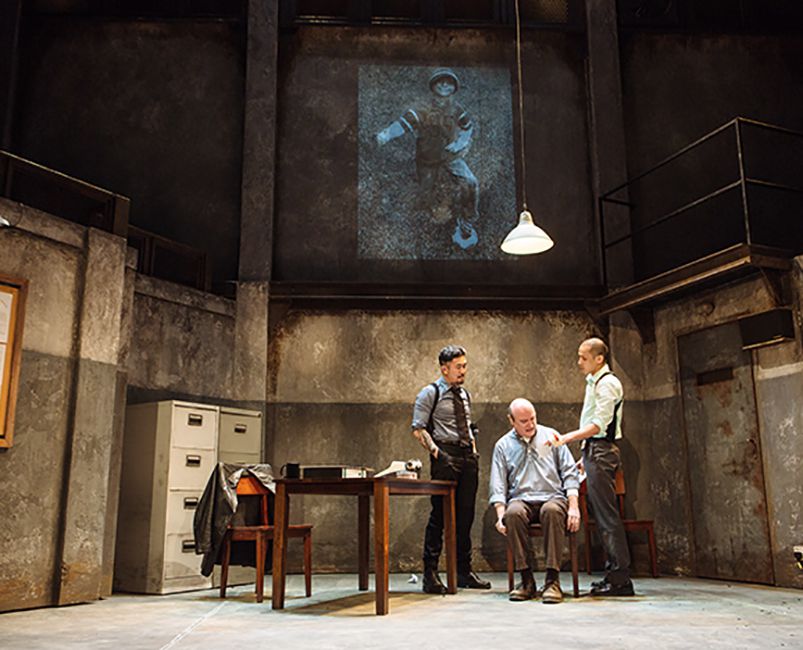 Clashing opening music and this total darkness give a clue as to the tone of Martin McDonagh’s hard-talking tale, directed by Tracie Pang and starring husband Adrian. It opens in a police cell, where writer Katurian is being harshly questioned by a couple of cops. The crime? It doesn’t take long for the audience to guess that there won’t be any happy ever afters here, and soon enough the stark subject of child abuse is revealed. I’ll be honest, it’s tough viewing – but well worth the rapt attention given by the packed audience.

This is not the play’s first Pangdemonium outing; they gave it a successful Singapore run in 2007, and past productions have earned it two Tony Awards and an Olivier. The Pangdemonium gang have treated the hardcore script with a flair and vim typical of their work – this is what has helped give the theatre group its well respected name in this town. True to form, lines are delivered snappily, direction is tight, and comedy overtones allow the audience to breathe now and then (even have a really good laugh, at times) as the bleak details of the dark plot unravel.

It’s a long stage-play with minimal set changes and a main cast of just four, plus some small side characters. I was impressed at how the four men held their poise and character throughout the story. I can see how hard it would have been to edit the script down because each line holds value, each scene has a new meaning, a new twist to the tale. Artful stage direction keeps the audience hooked throughout, and the set, though minimal, was clever and emotive. The cast had our full attention; you could have heard a pin drop.

Look out for gunshots, vomit, spit and blood – this could be why the play is rated 16 and it’s definitely not a fun day out for all the family, but true to Pangdemonium’s core values, it is a worthwhile and masterful piece of drama and earned the cast a standing ovation. I’ve already got my eye on tickets for Tango, next play in the 2017 season, coming out in mid-May. Pangdemonium’s The Pillowman is at The Victoria Theatre until 12 March. For tickets CLICK HERE