BB cream took the beauty industry by storm a few years ago and I, like most people, have a tube of the stuff I am wedded to. After all, what’s not to like about a multi-tasking wonder product? (Estee Lauder’s Asian version ‘Cyber White’ is a bang on perfect match for me; their European BB cream is too dark, which I’ve banged on about before here). 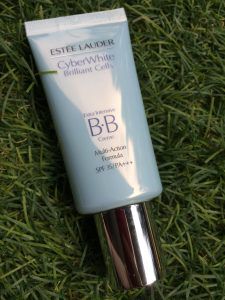 Anyway, it was not too much of a leap of faith for me to move on to sampling CC cream – Colour Correction cream – after all, as every beauty ed will tell you, CC is the new BB *rolls eyes* 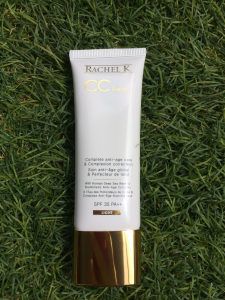 Actually Rachel Kum, who’s the creator of the particular CC cream I can’t get enough of, knows that. She’s Singaporean and she pioneered the first ever CC cream back in 2010 under her label Rachel K Cosmetics.  That’s a whopping great THREE years before Chanel and all the others got in on the act (Chanel launched their CC product only this year).

The recipient of a stunning write up in thoroughly credible Women’s Wear Daily this month, I am amazed her products are not more widely reviewed by the mainstream press. They certainly sell; sales from her CC cream last year totaled (raise pinky to corner of mouth and say it with me) S$1,000,000.

I met Rachel earlier this year through a mutual friend and she is both lovely and infuriating in equal measure. Lovely, because she really is a rather nice person, and infuriating because she parties hard and always looks damn good. Her skin is dewy, fresh and glowing. Always.

Here she is backstage when Aerosmith were in Singapore. See what I mean? Most people would be a sweating mess

The newest Rachel K CC cream (white tube of promise; pictures #2 and #3) is launching here in two weeks time…and I love it. Similar to her existing, trailblazing one but with parabens and talc removed, she’s also introduced three shades: very light, light and medium (light is my colour; very light is too light – even for me). 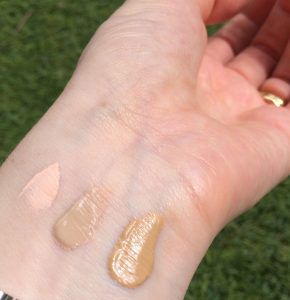 It gives more coverage than my trusty BB cream yet goes on very easily with minimal blending. I even use it under and over my eyes (in part because I am lazy and in part because it’s actually quite good at covering any dark circles).  It’s also great for wearing out at night, where BB cream doesn’t really give anything like enough coverage.

So what is CC cream? Colour Correction, Complete Correction…it varies according to which brands you listen to. Whatever, the main point is that CC cream is supposed to have a lighter consistency than its BB predecessor yet give more coverage and care for your skin. It should ultimately correct and even out skin tone.

Rachel maintains that hers is 75% skincare and 25% makeup and is so beneficial for the skin that you could even sleep in it (no thanks, I hate the idea of having even a scrap of make up on my face when my head hits the pillow…but I like the idea of it being that good for your skin).

What I also really like is its price. The about-to-launch, paraben free Rachel K CC cream will cost around S$47 (price to be confirmed in two weeks time when it is on-shelf, but it will be just over, or just under, this figure; Chanel CC cream costs $82 just to put it in perspective).

Rachel K stockists include Watson and Sasa and it can also be purchased online via Luxola from the end of November.

Application Tip: the CC cream should be patted, rather than rubbed, on to skin. I usually forget this until I’m about half way through applying it…but patting does work better.  I’ve then taken to finishing it all off with a light dusting of Bare Escentuals Mineral Veil in original which is essentially a translucent powder (available in Singapore from Sephora).

Rachel K Cosmetics are made in Korea.  Her CC cream will be launching here first before being rolled out across the US and UK.

Changmoh/The Chinese Angmoh is an anonymous, online diary of my life in Singapore, where I have one foot in the expat camp and the other firmly planted on the local side of the fence:  I love durian, I have a bunch of Singaporean friends who find it a scream that when I arrived I paid at least 30% more than they did, for anything, even if I bargained, and lastly I like to think I am actually half Chinese.  Maybe even three-quarters.

Read my journey through Singapore city living, treading the gap between the two worlds of East and West.