Places in Seoul to take anyone really

Well reflecting on the year that has been, I thought I’d write about my best times so far in the ROK. The year 2012-2013 was a really great one, fun-filled and action-packed. 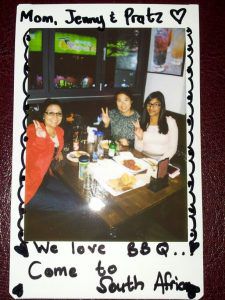 By far the best moments for me happened over Chuseok holiday last year, when my mom visited from SA. She arrived on 26 September, after what she had described as a looooonnnggg and tiring flight. The night she arrived saw the start of all things wonderful. We managed to visit most (if not all) of the major tourist sites and attractions in Korea. In the month that she was here we definitely created memories that would last beyond a lifetime.

The Friday night of the Chuseok holiday started our shopping extravaganza or what others may call an “addiction”. We kicked butt at the Paju Premium Outlets and afterwards got our hands on the most delicious handmade burgers in town. We dined at a little place called “Burger Hunter Plus”. After insanely overeating we headed home, prepared for the next day and got some much needed shut eye. 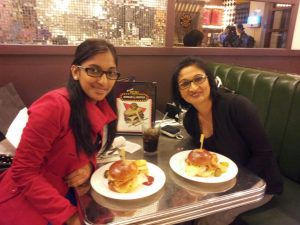 When I first got to Korea, there were many places in and around Seoul that I was fortunate enough to explore. One of the places that left a lasting impression had to be Insadong. Hence, first on our agenda was a trip to this vibrant and unique street. We walked around, shopped, ate and experienced all things wonderful. After sunset we headed on out to take a quiet stroll around Gwanghwamun Square… AWESOME doesn’t even begin to describe what this place is. The towering statue of King Sejong is a glistening site accompanied by a statue of Admiral Yi Sun Shin, which is as equally as breathtaking. 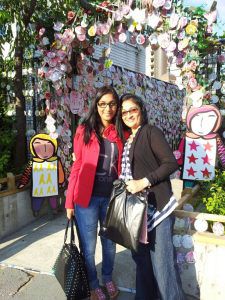 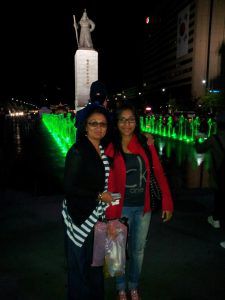 The next day we hit up The Korean Folk Village in Yongin and boy oh boy was this a trip or what. An average travel time of about seven hours to get there and then back (as we braved the madness of Chuseok traffic) drained us! Despite it, all this did not get us down, when we eventually got there the site was totally worth it. To see Korea from where it started and progress to the technologically savvy hub that it is today was truly the greatest site. 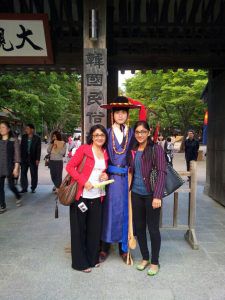 The village was packed with locals dressed in the traditional Korean Hanbok, along with babies dressed up in cute little dresses and hairpieces. We headed back home starved as there wasn’t much “Hindu friendly” food to be found at the village. Dinner was devoured at Korea’s famous “Mr. Pizza”. We topped up our tanks and headed toward the subway.

On Monday we did as all women should, we went mall surfing and landed at COEX. The largest shopping complex I’ve ever seen in my life! Thanks to it being the holidays we got to watch a few traditional Korean performances about the Korean Thanksgiving Holiday. 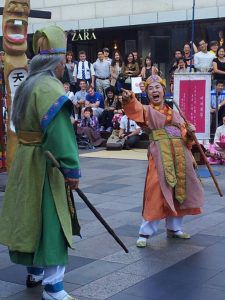 Of course shopping is always on top of the agenda! COEX plays host to a wonderful aquarium, this time however we had to take a pass on it, because it was so overcrowded. Lunch was a drastic change of scenery. We ate at the serene “Pho Mein”, a Vietnamese restaurant which serves up the most amazing dishes. Afterwards we motored toward the Seven Luck Casino. Korea is not known for its casinos. In fact if you think about it, it’s practically non-existent to locals as Koreans are prohibited from gambling. Nevertheless we took out advantage of being foreign and went on in…So different from gambling back in SA! But the concept was of course the same and as usual we managed to lose ourselves some dough.

The next day we found ourselves in the global and multicultural hub of Itaewon. Not one of the priority places on our list to see, but we thought we’d knock it off while we could.

Next on the “to do” list was to visit Namsan Tower. We ‘subwayed’ and cable-car’d ourselves there late noon. There were several traditional performances and a flash-mob of teddy bears dancing to Gangnam Style (Yes, Gangnam Style was still embarrassingly popular back then). 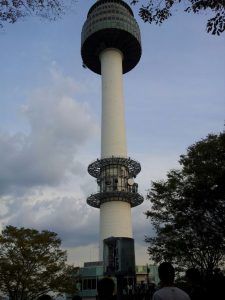 Following the very creepy impersonation of a “teddy bear PSY” we headed up to the Observatory just before sunset. What a beautiful sight to see. The Seoul skyline really looked its best from way up high. Recollecting the memories of spotting so many wondrous mountains in the distance and looking down at the peak-hour traffic which resembled an ant army still leaves me breathless. This was yet another moment the camera could not capture.

We departed from the tower and headed the shopping capital of Myeongdong! First we strolled around the Shinsegae Department Store, picking up a few bargains. Then we crawled the streets of Myeongdong.

The next day we hit down the Noryangjin Fish Market and gee wizz did it hit us back. Okay it was a little smelly, but that comes with the territory. Despite this it was a great site. I saw crabs the size of full grown husky’s and shrimp the size of anacondas! 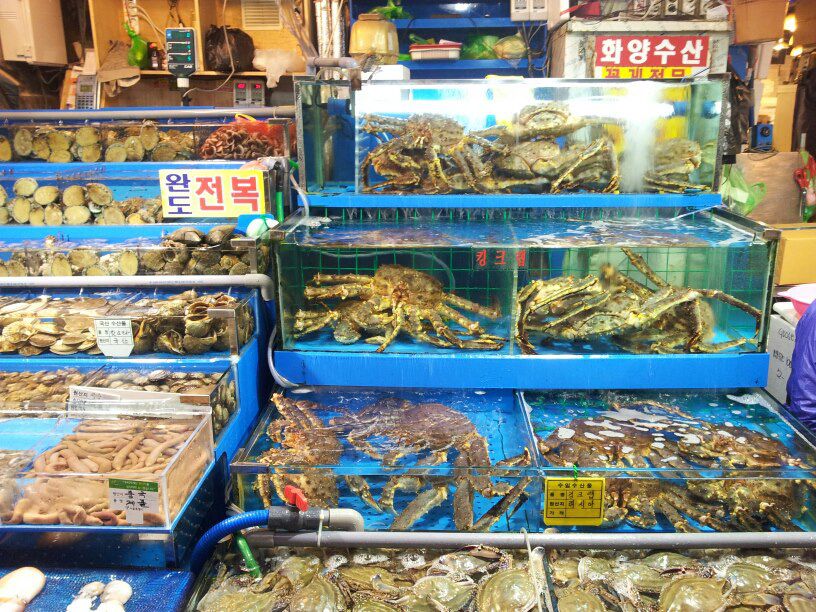 We got ourselves a good deal on some fresh seafood (along with great service) and then headed home with our cooler bag in hand. Through the days blistering heat, we kept hoping that we will get all the fish back safely.

That night mom got to try one of my favorite foods in Korea, the awesome dduk galbi. 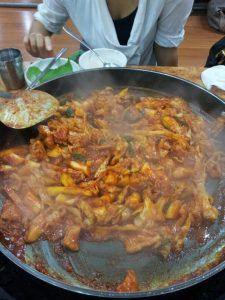 Dduk galbi is a Korean specialty dish. Its base is marinated chicken that’s stir-fried over a hot pan, right in front of your eyes. Accompanying the chicken are cabbage, (no dish goes without cabbage here!) slices of sweet potato, spinach leaves and some delicious tteokbokki (Korean rice cake). That mix is seriously a masterpiece!

After a few rest days we headed on the Han River Cruise. Just a few hours before the Seoul fireworks festival could begin. It was experience that had to be lived. Right from the get-go the fireworks engulfed us with color, which filled the night’s sky. This was short lived however, as we were soon after crushed by latecomers who were trying to see the same thing we were. At that moment I despised Korea for the first time. This year, I’ll be skipping those crowds. 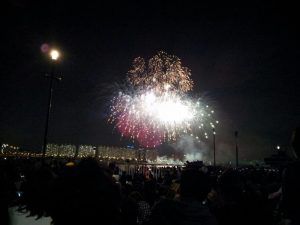 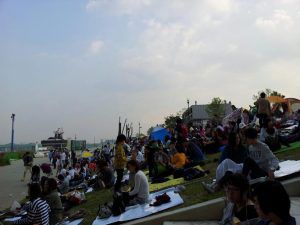 You cannot come to Seoul and not visit Gyeongbokgung Palace! The amazing architecture along with the stunning views from within the palace walls are a photographer’s paradise and a feast for any eye! 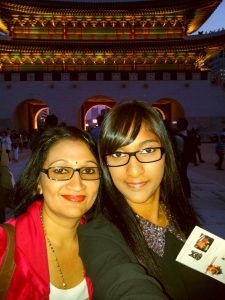 We went on to look around a gem in Seoul, Gwangjang Market I mentioned in my previous post, (where everything looks the same!)

A major highlight of our adventures has to be our trek to Everland. Korea’s very own “Disneyland”. It definitely did not disappoint. We loved everything about the amusement park. It offered world-class caramel popcorn and attractions! We loved it even more when we were getting our guts smushed around on “Lets Twist”. Everland is beyond amazing! I suggest that if you are sticking around for a year, definitely get an annual membership. 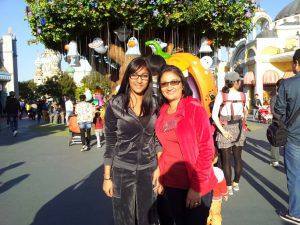 During moms last week here, we managed to get as close to South Africa again as we possibly could. We dined at a phenomenal restaurant, namely Braai Republic in Itaewon. 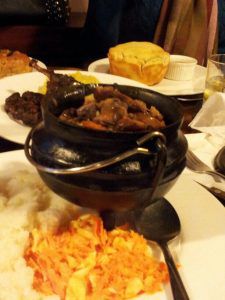 Dinner was with the best company and most amazing co-teacher, (my co-teacher) anyone could ask for. We knocked back a few (too many) tequila’s… had ourselves some awesome food (even a poitjie) and to end it all off… sampling the BEST milk tart the world has to offer. Even better then I’ve tasted back home (Durban).

The final weekend dawned on us and I planned on going all out for this one.

So what better way to be splashy, other than to head to Gangnam. Here I had booked us a full day of pampering at a luxurious day spa. First, we were treated to a hand and foot massage, then a soak in the jet spa, followed by a full body massage and to top it all off a wax manicure. Afterwards we were so relaxed; we could not make it back onto the subway. So we decided to check-into a hotel and spend the night.

On the final day of fun and frolic we went to watch a Nanta performance (Korean style non-verbal performance). It was a lovely way to end our time together. Saying goodbye at the airport was the worst of it all. 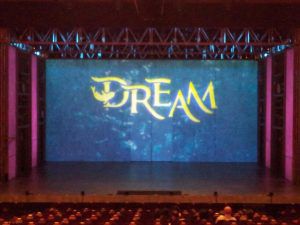 But saying goodbye is a whole other topic for another time!