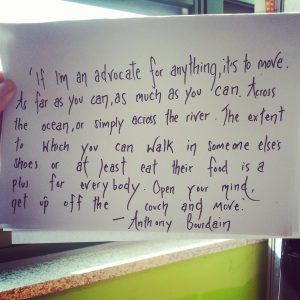 I came across this quote and it got me thinking about living in a foreign country as opposed to travelling through one. When I was 19, I travelled through Thailand, Laos, Vietnam and Cambodia. It was an eye-opening experience, but I was still a typical tourist.

It wasn’t until I lived in Georgia though, that I realised that in order to really comprehend a culture or a way of life you must try to actually live it. I lived off 500 lari (300USD) a month and stayed with three different Georgian families. I partook in their day to day doings and witnessed their interactions, their sleep patterns, their devout habits and their truth.

Living in Georgia and South Korea has enabled me to have the chance to gain a deeper insight into other cultures, although language barriers limit my ability to understand cultural complexities clearly. I have learnt not to judge a persons actions or habits, as they are often due to ingrained thought patterns resulting from traditional cultural norms and societal values. There are always reasons for different mindsets, traditions and beliefs. Gender roles are handed down from generation to generation, as are stories, values and ideals.

Now that I am living in Korea, I can imagine just visiting for a week or two. Tasting the food, seeing the temples and the popular tourist districts and gaining a perception of a country based on so little. I would choose to see its beauty, I would try to see some grit, but time would be short. If I were a tourist in Korea I probably wouldn’t notice the gender inequality here, which has become more apparent to me over time.

In Georgia I would see men smoking anywhere and everywhere. Sometimes I saw women buying cigarettes, but it was fairly rare to see them smoking publicly. In Tbilisi it was more common, but in the smaller towns and villages it was a rarity. Often I would use the public bathroom in a cafe and the toilet stall would reek of smoke, sometimes there were cigarette butts in the toilet itself. I wondered why the women chose to smoke in that area… it was confined, people urinated in there, and ventilation was minimal. Surely a cigarette would be best enjoyed on the cafes terrace, paired with a strong, sweet Turkish coffee. I asked a few people about it and apparently it wasn’t perceived as ladylike to smoke in public. During my time in a small village in the Guria region of Georgia and in the coastal city of Batumi I found that Georgian men were generally treated as the head of the family. They didn’t cook or clean, at least not in my experiences. The women would work full time, look after the children, and do the majority of the household necessities. This bothered me a bit. It was challenging coming from New Zealand and being accustomed to an environment and a family in which, from my perspective, men and women were equal, to one in which this was not the case.

Georgia, much like Korea is undergoing change at a rapid pace. After leaving Georgia’s disparities behind, I imagined, for some silly reason, that in a nation as technologically advanced, economically sound and wired as South Korea I wouldn’t encounter such blatant divide when it came to the sexes. I didn’t do my research.

The results of the 2012 gender gap report actually show that rapid economic development does not lead to gender equalization. The report is based on four categories: economic participation and opportunity, educational attainment, health and survival and political empowerment. New Zealand ranks 6th where as South Korea is 108th below Georgia at 85th. South Korea is ranked 108th out of 135 countries and women here earn on average 39% less than men.

One of the first things that alerted me to the issue of gender inequality in South Korea was the women once again hiding out in bathrooms for their fags. Are they second rate citizens who can’t do as they please? Will they be judged? Why aren’t the men judged? Does it not fit society’s ideals of femininity? Why has society deemed it improper?

For women in South Korea it seems that much emphasis is based on image. I am always astounded by the stiletto heels that many women wear here. They are not worn only for special occasions, but just for day to day activities. Walking to work, work, grocery shopping, a casual coffee with a friend, studying etc. I have watched them fall on the sidewalk, sprain their ankles, hobble like old ladies and get their heels caught between escalator stairs. All for what? A lengthened image of the leg? Why?

Much importance is also placed on ‘securing’ a boyfriend, then a husband and then having children. Once this has been attained then what? The epitome of feminine happiness? One of my colleagues has often expressed feelings of being burdened and stressed at large family gatherings. Daughter in laws are traditionally expected to prepare all of the food for everyone, which must take away some of the opportunity for enjoyment at such occasions.

There’s an abundance of beautiful aspects to traditional Korean society. Aspects that hopefully won’t be lost or discarded with the country’s rapid development. But as for traditional Confucian gender roles and norms, I hope they are done away with. I hope that women here can feel less pressure to live up to societies current ideals for them.

South Koreas first female President Park Geun-hye stated in November last year that “we should now establish a feminine, motherly leader who may sacrifice all for the sake of the people.” I wonder what she really meant by feminine. Are women still expected to sacrifice all? Was this perpetuating traditional and stereotypical gender norms?

Gender equality/lack of, is an issue that life in South Korea has brought to my attention. Living in this foreign and fascinating country has encouraged me to ask questions and to read about why things are the way they are here and how they are progressing daily.