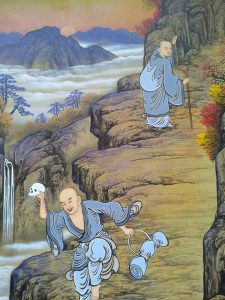 The sky was overcast, the clouds were low, and the drizzling rain seemed like it never wanted to leave. Yet somehow this was a perfect day to visit Mu Sang Sa. When I arrived the monks were busy so I was left to roam around the temple grounds. I walked up a hill to the Buddha hall and stood outside the ornately painted building. Mist hung over the mountains, the air was clean and fresh and all I could hear were birds. I just stood there and stared for a while, there were no people in sight.

I circled the building and looked at the paintings covering its exterior, one depicting two monks held my attention. One monk was holding a skull, while the other seemed to be beckoning him, or waving goodbye, while walking in the opposite direction toward the setting sun. I would have to ask someone about it when I got the chance.

I found a door to go inside, and was greeted with such stillness and serenity. There were three statues of a big golden Buddha and so many lanterns and lotus flowers. I sat on the floor of the big open room and breathed in the tranquility.

Later I was to interview some foreign monks for a magazine. I was a bit nervous about it, although I had spoken to some at a different Zen Buddhist temple the previous weekend. It’s just I have so much respect and a bit of trepidation when it comes to Zen Buddhist monks and nuns. They astound me with what they are doing for the world and what they have given up, or not, to immerse themselves in a monastic life. I had an amazing time interviewing them and hearing their stories about how they came to be a monk or nun in Korea. 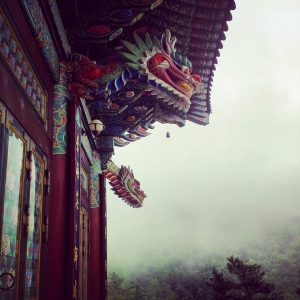 I hope I can go back to musangsa for a temple stay in the future. If you want to visit to do meditation, listen to a dharma talk, or to stay for a weekend retreat or longer you can get there via a 1.5 hour ktx ride from Yongsan to Gyeryong, from there it’s a ten minute taxi ride to the Zen Center.