My friend and I got tickets to Nanta, 난타, last week. I was pretty excited about it as I had read and heard a plethora of positive feedback.

Nanta is described as ‘a non verbal performance that integrates Korea’s traditional rhythm with comedy and drama in the kitchen.’ It is designed to appeal to a diverse and multi-cultural audience and it appears that Nanta is generally rated among the top five tourist attractions in Seoul. 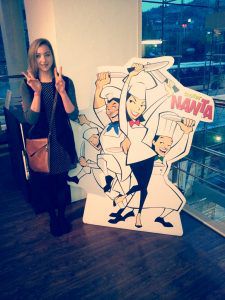 We found the newest Nanta theatre easily via line 5, Chungjeongno station, exit 7. The Nanta building is connected to exit 7 so you don’t need to go outside. There are a couple of nice cafes you can relax in before entering the theatre. Once inside we were pleased with our third row seat, and the theatre was really clean and minimal. The show started at 8pm and went for 100 minutes… maybe 40 minutes too long.

Nanta’s loose plot revolves around five characters, three of whom are chefs preparing for a wedding banquet, then there is their manager and his incompetent nephew. The show is basically non verbal and focuses on drumming and rhythmic sounds via kitchen utensils and props.

The drumming and cutting up of food was pretty entertaining initially, but after a while it was a little repetitive. My friend and I both found the humor very child like, my eyes began straying to the clock after one hour. It all seemed quite amateur; I think children between the ages of 5-10 would enjoy it a lot though, and I think if I had children I probably would have enjoyed it more. The humor was very slapstick – toilet jokes, characters falling over and a chef getting a broom stuck up his ass seemed to be entertaining many members of the audience, but we just couldn’t get into it. I also kept wondering why the one female chef was wearing a chef shirt that was designed to be open at the front so her stomach was sticking out, exposed for a number of boiling oil splatterings. Maybe they thought the show needed some sex appeal or something… When I looked on the Nanta website it did show that her characters name was ‘hot sauce’.

The performers were very enthusiastic and well rehearsed though, and they were sweating profusely with all of their drumming and plate catching exertions.

I don’t know, Nanta has received positive reviews from thousands of viewers so I must be a negative cynic. Tickets are between 40-60,000 won, thankfully ours were free. Nanta was just too long, repetitive, and uninteresting for me.

Have you been to Nanta? What did you think?