Right now there are North Korean citizens preparing to flee the restrictions of their birth country.

There are defectors in South Korea struggling to adapt to a new and foreign society riddled with prejudice and misunderstanding.

There are North Korean refugees trapped in countries where they know no one and cannot speak the language.

But there are also a number of dedicated human rights activists and non governmental organizations committed to informing us about the ongoing atrocities in North Korea. These organizations are devoted to assisting with the assimilation and education of North Korean defectors. 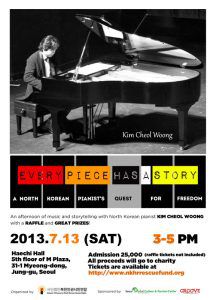 From a young age, North Korean Kim Cheol Woong started training as a concert pianist, as the years passed, his talent grew and people took notice. However, he was reported to the National Security Agency and punished for playing Richard Clayderman’s ‘L for Love’ for his girlfriend. In North Korea, a musician who plays ‘capitalist’ music can end up in a prison camp. So Kim Cheol Woong decided to escape North Korea to fight for musical freedom. When he fled, he lost everything and ended up working as a servant for a poor Chinese family. Eventually he found church with a piano and his friends within the church helped him to enter South Korea.

You can meet this talented and brave pianist on Saturday 13 July at NKHRs afternoon of storytelling and music.

Then this Saturday 6 July, NKHR is holding ‘Songs of Freedom.’ You can go and relax and listen to some indie folk music and support the NKHR rescue fund. 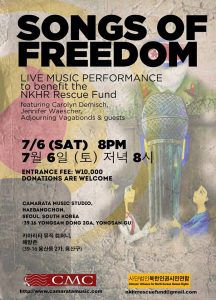