Seoul expat, John Shaw, is a snowboard enthusiast and blogger for Korea Snow.  He gives info on how he beat the summer-time blues and got through the heat by hitting South Korea’s indoor slopes — and it’s not too far from Seoul! Woongjin Play Doci is a complex located in Seoul’s satellite city of Bucheon.  Snow enthusiasts can go to get their fix between winter seasons at this indoor snow park.

Below is a story from John (this is The Seoul Story blog, after all) about his snowboarding experience in the Woongjin Play Doci. 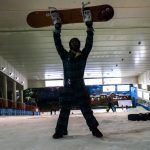 It gets hot in Korea during the summer. Really hot. I sat sweating under the air conditioner in the July heat watching video after video of last winter’s sessions around the world and falling further and further into summer depression.

There was only one thing for it. A quick fix to tide me over until the powder once again graced the Taebaek slopes and my feet clicked back into bindings.

“Eddy!” I texted, “ Get your board and gear. Next month we hit the indoor slope.”

Woongjin Play Doci is a complex located in Seoul’s satellite city of Bucheon. It consists of a water park, golf range and an indoor slope. A taxi costs 3,000krw from Bucheon Sopung Bus Terminal. The water park was very busy but the slope seemed deserted. We arrived for the night session, 7pm to 10pm. This cost 30,000krw but is discounted when using certain bank’s debit cards.

The slope is approximately 250 metres but, on getting the tickets, we were informed that only the low part of the slope would be open this weekend. We were a little disappointed but, hey, even snowboarding 5 metres would be amazing in summer! And so, in the 30 degree Bucheon heat, two ‘waygookin’ donned their heavy winter gear and, with a fist bump and a ‘Fighting!’,  hit the slopes for the first time in 6 months.

Roughly 70 metres of slope was open. This consisted of a beginner’s gradient to the left and small park to the right. Eddy and I spent the session on the slope. We warmed up by doing a few runs but these 5 second, 2 to 3 turn teasers got very boring very quickly.

We shook it up a little. Any bump in the snow became a launch pad for practicing ollies and 180s. Eddy would stand at the top or bottom and rate my jumps and vice versa. That night session we sharpened skills which had rusted as the lay dormant over spring and summer.

Afterwards, over a bottle of soju, we reflected on the day’s events. It had been great to strap into the bindings again but, somehow, we just weren’t stoked or satisfied. Oh well, we’d sleep on it and try again tomorrow.

The next day we started off the same as the night before. We were still not satisfied.

Now, understand that neither Eddy nor I have had any desire to ride park before. I adore bombing down slopes at pace with the board pointed at my destination and the throttle at warp 5. Eddy prefers a relaxed ride. Sweeping carves, riding up banks and ollying ice patches are his cup of tea. Alas, we could do none of this at Woongjin.

Our heads turned to the right. The Park.

The park consists of a box and rail at the top and a kicker towards the bottom. Eddy was more restless than I was and went first. I held my breath. He started down the park. He nailed the box. He sailed down it as if he had done it a thousand times before.

“Anything he can do, I can do better.” I thought and hurried up to the queue.

It was nerve racking at the top. Did the box just triple in size? Do I need to ollie on to it? Is it slippery? Will I fall, catch my hand, break my wrist?

“Eh, you first.” I gestured to a Korean as my heart pounded. And then, before I knew it, it was my turn and I had started down the slope. The box looms in front of me, I’m on it, I’m off it, it’s over, I did it!

We ran the box once or twice more until we were really comfortable and then I turned my attention to The Kicker.

It stood less than 4 feet high but to a park newbie like me it may as well have been a superpipe. Spurred on by our success on the box we stood once again at the top of the park and, with another fist bump and shout of ‘Fighting!’, I went for it… and fell on the landing. But not badly. Just like the box, it’s a lot easier than we thought it would be. It’s all in the head.

After a few more tries I had it down. I never figured that I (ever the speed freak) would  have any interest in kickers and such but the feeling of landing that first jump was simply awesome. I was stoked.

Pumped up after getting comfortable on the kicker, we ran up the escalators to try again but, to our dismay, our new found home in the snow had closed. Session over. Time to head home.

My heart was still pounding as I got changed. We had come to fill a void left by the seasonal nature of our chosen pastime, we left with a whole new aspect of our sport increasing our yearning. All I can do now is go back under my air conditioner, throw on another movie and wait out the three months. Winter 2014, let’s be havin’ ya!

Here are some photos from John: 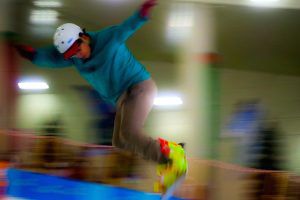 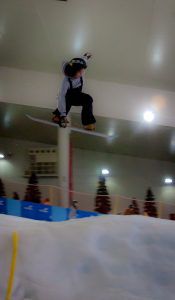 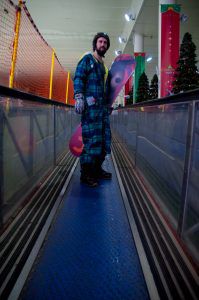 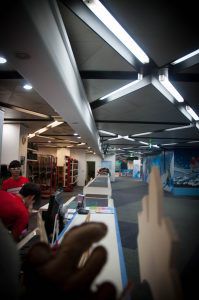 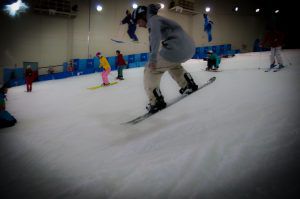 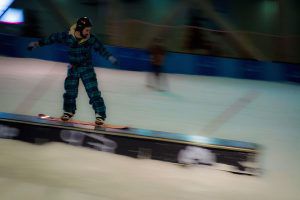 News, reviews, and interviews in and around Seoul, Korea.