What a good gastro year Madrid had in 2016

These days there are many top notch places and up-and-coming foodie areas in and around the capital. Despite fears that perhaps gentrification is starting to take place in certain areas (nooooo, don’t do it Lavapiés!! We love you the way you are), there is no doubt that Madrid’s food scene is becoming more varied, exciting, international, trendy, forward-thinking. Of course whilst maintaing Spanish culinary traditions and it may come as no surprise that many of the new players on the scene are actually Spanish restaurants, or at least fusion Spanish + *insert other cuisine*.

Whilst 2017 promises to be very interesting indeed (and will be the next post, see what I did there), let’s take a quick trip down el Callejón de Recuerdos memory lane and this way I can share with you guys some of my fave places that opened in 2016. Places that…er…tickled my tastebuds. That er…impressed my palate.

Okay down to business. No time for puns. By the way, if you would like to choose YOUR favourite restaurants and places for 2016, you can vote in the Plateselector Awards and in doing so, you could win a meal for two at one of the winning restaurants: http://www.plateselector.com/plateselector-awards/

The fusiontastic restaurant with the explosive name just round the corner from actual Calle Ponzano. Sasha Boom is like the edgier, older sister of Pink Monkey, by the same team as Asiana and Asiana Next Door. Inspired by his travels and a close friend slash food muse slash cool chick – “Sasha” whose portrait hangs on one wall,  Jaime Renedo has managed to crank up the fusion notch and so Sasha Boom’s menu of 20+ dishes includes not just Peruvian, Mexican, Mediterranean flavours, but also influences from Lebanon and Greece. Small-ish shareable dishes PACKED with exciting and surprising flavour combinations. A spacious, trendy and well-decorated restaurant that is much bigger than Pink Monkey, where César Martin’s Lakasa used to be.

Star dishes: Mussels appetiser / Any of their ceviches – they are complex and divine / Lebanese “Pizzeta” – yum!

Extra brownie point: Terrace!!! What’s even better is that it’s not right next to the main road. 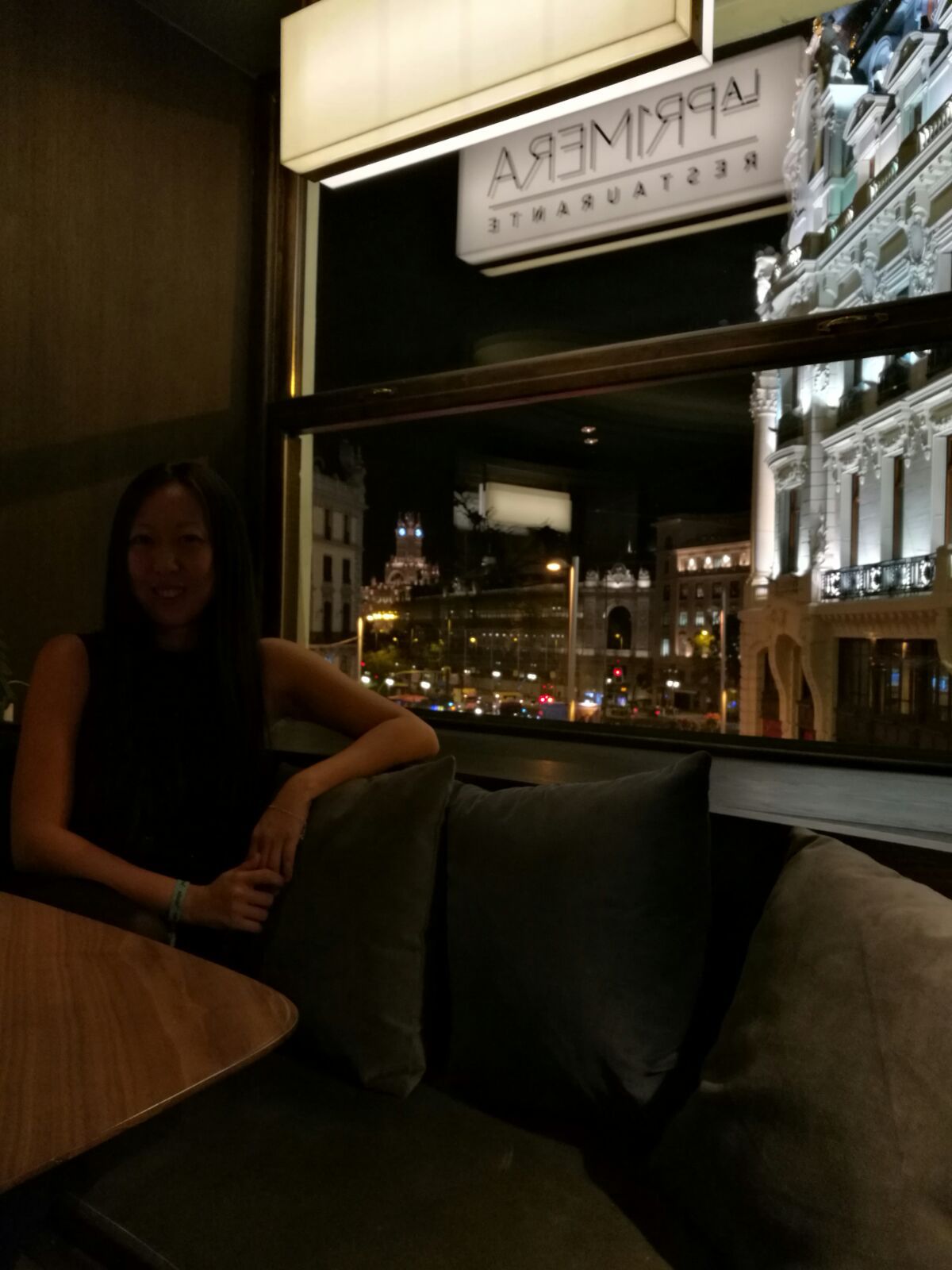 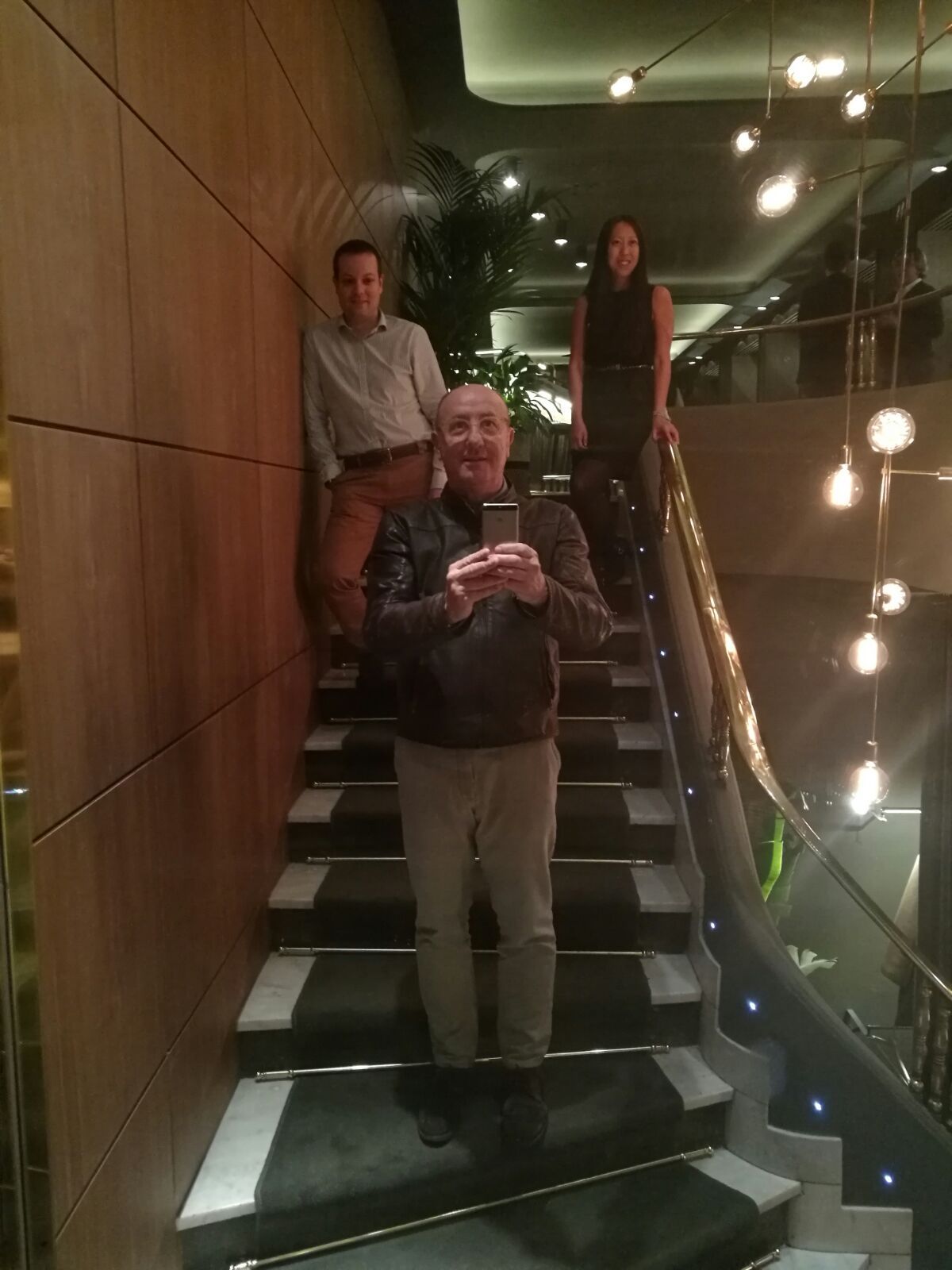 I was really excited when La Primera finally opened on Halloween, funnily enough on the same day as Five Guys further up Gran Vía. No comment – each to their own!! La Primera is the fourth culinary project from Grupo Cañadio, the popular and much-loved Santander restaurant group headed up by the charming and quirky Paco Quirós who loves taking mirror selfies with diners and guests. In case you are not familiar with them, a quick crash course so you can impress your Spanish friends.

La Primera (named after a beach in Santander) is located on the 1st floor (=VIEWS!!) of the emblematic Grassy building (designed by an architect from Santander) occupying Gran Vía 1 – so it is destined to be successful, what with superstition on its side! It is more elegant, refined, darker than the other restaurants, beautiful lounge music, a fireplace even! The menu combines the best of the three other “houses” with some exciting special additions and won’t break the bank. Definitely worth checking out, even if just for breakfast. This is affordable gourmet dining with a view!

Star dishes: The Ensaladilla is always worth trying / Broken eggs with truffle / The “Alex flan is just hubba.

Other honorary mentions for new restaurants that opened in 2016: BumpGreen, NuBel (below – spectacular), Habanera, Fismuler and the chic and elegant Gigi Meet Me.

2016 was the year that we saw places opening up in Madrid right left and centre specialising in one specific food or dish. A trend that I found and find interesting especially as I didn’t think Madrid’s food scene was “mature” enough to reach this kind of specialisation. But it is…or at least in Malasaña!! Which is why perhaps it comes as no great surprise that Madrid’s first ever Tiramisú cafe opened up in the heart of open-minded Malasaña. Good old Malasaña.

Medri is indeed a happy, cute, friendly and welcoming place and back in September I got to meet and interview Veronica and Luca (from Canary Islands and Rome respectively), the young owners and friends behind this delicious concept. It is certainly innovative and original for Madrid but is actually fairly common in Rome/Italy, where restaurants can’t possibly excel in all aspects of Italian cuisine and so many choose to focus on certain dishes or for example pasta vs pizza. Makes sense right! In their case, they wanted to give the spotlight to the internationally-known and popular dessert and relatively-hard-to-prepare-at-home tiramisú and make people happy! Seriously, we couldn’t be happier, especially as their individually portioned and freshly made, NATURAL tiramisus are yum…and also not that sweet. Bonus. By the way, FYI Medri is Luca’s surname so basically he’s got a bit of that Prada or Armani flair in him! Tiramisú in Madrid = Medri = Happiness.

Make sure you try: Their Nutella and coconut tiramisu! The “star” one.

Believe it or not: They also do bigger / giant ones, perfect for sharing or parties

Cocktails for a tenner

Salmon Guru only opened in Summer 2016 yet is quite possibly THE funkiest and coolest cocktail bar on everyone’s radar at the moment. Interestingly enough, it is in the heart of what I call “Touristy Madrid” – just round the corner from Plaza de Santa Ana, NOT in exclusive Barrio Salamanca (like Hermosos y Malditos) or trendy Chamberí (The Dash). Yet unlike some places in the centre that we may associate with being “tourist traps”, Salmon Guru is an honest and quality place with the friendliest staff, reasonable prices and some of the most original and creative cocktails I’ve ever had in Madrid! In a fun, neontastic and light-hearted setting.

You might be thinking “Wow, what a cool place” but it really isn’t that hard to believe should you guys know that the person behind is it the dashing and dapper Argentinian mixologist and bartender maestro Diego Cabrera who has long had a strong reputation in Madrid. He is the owner of Le Cabrera and is is the European Ambassador for Tanqueray. Mean CV and a lovely smile to boot.

Make sure you: Ask them to recommend one of their interesting concoctions based on your cocktail preferences. I personally loved Tonic Sprenger.

Extra brownie point: Neon lights! But not in a tacky way!

Tidbit: Salmon Guru, according to Diego himself, is because in Nordic mythology Salmon represents wisdom, so their name is kinda like The Wise (Cocktai) Guru..!  Very cool.

Rooftop of Mercado Barceló (make sure you take the escalators that appear to go ALL the way to the top…). Official address: C/Barceló 6

One of the most laid-back, chilled, cool-but-without-trying-to-be rooftops in Madrid at the moment. On top of the Mercado Barceló which is also getting more attention, just a stone’s throw from Tribunal metro and not far from Alonso Martínez. What’s even better is that they can withstand the winter season and has stayed open when many rooftops shut, as they have a “Winter Terrace” section that is enclosed, right by the bar. Having said that, given that Madrid’s weather has been kind to us and mild, most people end up sitting outside in the sun anyway. Love it.

Whilst it may not be as commercial as Bellas Artes which also belongs to their group (Grupo Azotea) or as luxurious as The Principal, or as packed as The Hat, precisely this is why Forus Barceló has its hordes of loyal followers. It is a bit more raw, not pretentious, basically next to no “postureo” (THANK GOD!) and really green and cosy with a healthy menu and philosophy. Lots of different sections with different types (and heights) of tables and even a really nice cushion area. The views are nice as well – you can spot the “striking” Torres Colon over in Colon, the Telefonica building in the distance…but actually it’s interesting just to observe the beautiful buildings surrounding the rooftop up close. Last but not least, Juan the manager and his friendly and funky team including the lovely David and Sacri, will look after you and make sure you have a good time when you “go up to the rooftop” (subir a la azotea).

Make sure you try: Their fabulous fruit smoothies / their guacamole / the new hot dishes such as the rices

Interesting fact: As they are the same Grupo as the Bellas Artes rooftop, the food/menu has the seal of quality of the chef from The Tartan Roof – Javier Muñoz-Calero.

The Mint is a new 4* boutique hotel that decided to try and make the colour mint popular…and it worked, or at least the name is catchy and memorable. Its super cool rooftop The Mint Roof is sadly not AS minty but to be fair it is mighty colourful and with a lovely summery and beachy vibe. Perfect as it opened just before the summer last year but it was a great place to have a cheeky afternoon drink even during the sunny winter days. In any case, it is a popular rooftop option if you ever want to go rooftop crawling on just Gran Vía alone.

The views of Gran Vía on one side are just wow – you can spy the lush rooftop and pool directly across the road and people watch below. Dash over to the other side, behind the Food Truck brought over from France and you will see Madrid’s skyline open up in front of you. The Food Truck is also where you can order drinks and finger food though there is table service too. As there is normally a bit of a scramble to get the sofas, if they are taken, the tables by the Gran Vía side are just as pleasant and with misting as well.

Make sure you:  Stop and enjoy the views / Try some of the Food truck food options / Order a delicious cocktail

Did you know: This hotel chain Vincci hotels has at least 2 other hotels with rooftops on Gran Vía alone. Vincci Vía 66 – Gran Via 66 and Vincci Capitol – Gran Vía 41

These are some of the places that rocked my Madrid in 2016 – what are some of yours? Feel share to share with me and the AngloInfo Madrid community.

Remember to check out my main Spanish blog over on www.laguiriylagata.com

Beautiful, exciting, cultural and stylish Madrid through the eyes of a Londoner. Read all about Betsy’s life in the capital, which has been her home for the past 6 years…and will be for many more to come.