A wine harvest "vendimia" in Spain

Wine making is of course a very long tradition in Spain.  Back in the old days it was rather rough, although the locals here say that cannot be true because they sold a great proportion of it to France.  But then the locals here have not generally been anywhere near France.  I can confirm that there was and still is a lot of rough stuff there in big plastic bottles and much of it says “produce of the EU”, or, more tellingly “produce of Spain”.

About 30 or 40 years ago the Castellon farmers started uprooting their vines and planting almond trees for whatever reason I can only guess at.  Subsidies, wine mountains, that kind of EU thing.  The problem is that as the years have gone by, it has become evident that as beautiful as almonds are, they are very unpredictable.  Where grape vines prosper and gain character in a trying climate, the early flowering almond tree is prone to losing its crop during the inclement frosts that abound here.  I was surprised to discover that this is more of a problem in the plains than the mountains.

As a result there are many untended almond groves around.  Indeed mine was such and a sorry sight it was.  The locals now say there is no money in almonds and although this is not true on the flat plains, up here on the terraces it is a fact.  Almonds are demanding and labour intensive and when machines cannot pass through them freely to do their job, they prove a poor return for much time spent.

Now that the whole world has become wine mad, including yours truly, the poor almonds are being torn from the ground to welcome back the grape.  What is it about vineyards that make them so appealing, even in the dead of winter when in reality all they are is a bunch of stumpy twigs in rows?

I do not know, but they pull at my heartstrings and despite loving almond blossoms in spring, I genuinely rejoice at the revival of an old tradition that is so suited to this terrain.  Together with a dose of modern technology and expert blending the wine in Castellon, dare I say in particular the white, is improving by the season.  It is actually improving all over Spain, with my favourites coming from the Verdejo grape in Rueda, but here in El Maestrat a few vineyards of note are emerging with particularly excellent wines, subtle yet aromatic, dry yet not acid and not in any way tasting of chocolate or raspberry.  Clean, quaffable, and to be savoured.

The improvement has been actually quite rapid in wine terms.  From yellowed sherry stuff that rotted your guts and sent you to bed with a hangover, in the space of 8 years it has become a vintage to be proud of.  No longer the sugary crystals at the bottle’s bottom that tell of its shady origins.

The bodegas of ambition around here contract keen young oenologists from France who move the stuff upwards without making it into a cloying Australian mess, as would be too easy to do with all this sun. One such bodega is Clos d’Esgarracordes, situated between La Barona and Useres.

This magnificent estate with its exquisitely restored buildings and chapel has drawn my attention ever since I came here purely for aesthetic reasons.  The chapel alone caused me to buy a few cases about 3 years ago.  I have to be honest and say that though the red was truly fine, the white somewhat disappointed.  Not worth the cost, I thought, a bit nothing, a bit too tart. I passed it by in the ensuing years, took a few photos here and there, chatted to the owner, and then recently gave it another try. Wow!  I bought 10 cases and will be back for more – if there is any left.

At the end of September I was invited to witness the “vendimia” at Clos d’Esgarracordes.  It was a blisteringly hot day and despite the early hour, the heat crucified me as I stood between the rows of plump juicy grapes.   I could not fathom how anyone could work under this searing sun, but then again none of the workers were blonde and pale like me.  The women were for the most part lithe, with a smooth copper glow, and I felt a deep envy for their skin.

Breakfast, at 11, was a mere 30 minutes, and then back to picking again.  At Clos d’Esgarracordes this is still done by hand and time was of the essence as heavy rainfall was forecast for the next week.  I walked around the fields and took what photos I could before retreating beet-red and limp to the inside of the various viñedo buildings.

One week later I told two French visitors about the hands-on approach to the harvest and they shook their heads in disbelief. In France, Jacques told me, grapes are now usually plucked by machines.  Only the finest and most expensive vintages are hand-harvested.   And, Magali added, it just does not make sense for everyone knows that Spanish wine cannot match that of France.

But I did not agree and invited them to taste this year’s white from Clos d’Esgarracordes.  As Jacques uncorked and poured for us, I reflected on the day I witnessed the vendimia, the beauty of the place, its exquisite restoration, the paintings inside the bodega.  It seemed years before, the heat like a distant headache, impossible to imagine as now the skies were dark and heavy, threatening much rain.

We drank away, finishing the first bottle too easily and started on a second.  It slipped down pleasantly accompanied by a generous bowl of olives scented with mountain herbs.  Even the light drizzle that started did not stop us, not until it gathered pace and sheeted heavily past my open doors in a furious waterfall.

Later I would find out that 64 litres  (2.6inches) of rain feel in 30 minutes.   Just like “the rain in Spain falls mainly on the plane”, there is no good wine in Spain.  Both statements totally untrue, and by the way, ALWAYS have something to eat with your wine. That is what tapas are for after all! For more about Clos d’Esgarracordes  and taking a wine tour with a meal laid on click here 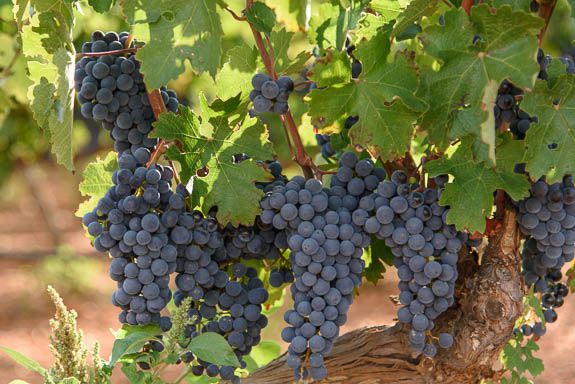