Just after World War II Spain started to attract increasing numbers of tourists, drawn by its amazing coastline and gorgeous climate.  Poco a poco the coast was cemented over, ugly high rises replacing the charming fishermen houses.  You can read about its commencement in the evocative book “Voices of the Old Sea” by Norman Lewis.

Today very little of Spain’s haunting fishing past remains in evidence along the coast.  One of the reasons why I live in the mountains is that as beautiful as the coastline is, turn your head in the other direction and more often than not you are confronted by a soulless concrete jungle.  Some tower blocks are so high and close to the sea that by noon the beaches they front are already in shade.

There are, however, some charming enclaves left, and one such is El Cabanyal, a collection of fishing villages that are now part of Valencia.  Several years ago writer Jason Webster published a tempting travel piece on the area in the Guardian that inspired me to visit it.  Since then I have been back time and again to marvel at the colourful mismatch of architectural styles while sorrowing at its, in part, hopeless decline.  As Jason wrote, “an unpolished gem”.

El Cabanyal is the shame of Spain, or as a local Italian student told me, no, not shame, more than that.  Although the area is a historically protected neighbourhood, it is blighted by plans to drive a monstrously wide road through the middle of it.  Many houses would be demolished, some of great architectural beauty, in particular a block of striking terraces built around an internal and very unusual  fisherman’s market fronting the beach.  The result according to many would be the fragmentation of a vibrant historic community by creating the right and the wrong sides of the tracks.

Whether this is true or not, what can not be denied is that uncertainty has hung like a cloying smog over the locals for 50 years.  The project has been put on hold several times, only to be resurrected by grandiose politicians with everything but the good of El Cabanyal or the needs of modern day tourism in their hearts.  Their ears are deaf, seemingly even to the highest court in the land that declared the project illegal.

A number of stunning properties have already been destroyed in preparation for this long outdated plan, leaving grim vacant lots of indecision.  What was maybe a plausible proposal 50 years ago is no longer relevant today.  The idea was to connect the core of Valencia with its stunning coastline, but truly it has  become easily accessible by car, train, tram or metro since.  It appears that the politicians want to leave their moment of glory, in much the same way as they built the  ill-considered and absurdly expensive Cuidad de las Artes y las Ciencias.  Impossible to maintain, this gigantic mosaic elephant has had to be closed before it was ever really open because it is falling apart.

If these politicians are not careful, their moment will become inglorious and they will be known for purposely removing an important part of Spain’s heritage. This at a time when preservation and conservation is more the order of the day.

In the three years that I have been visiting El Cabanyal I have never ceased to be bewitched by its colourful charm and ambience.  Its architecture is of a predominately Art nouveau nature, but interspersed with follies and pastiches of styles that clearly took the owners’  fancies in their day.

There is a certain  “Havana-ness” about it and all it needs to complete the picture is some retro cars.  This natural movie set is perfectly complemented by an historical  food market that hums with good spirits.  It is here that I usually park, stopping to buy some fresh capers and marinated olives, then slowly meandering through El Cabanyal’s grid of streets to the super wide  Arena beach.  It goes without saying that I pause from time to time to talk to the locals whilst partaking of numerous refreshments along the way.  In no particular order.

I love the area, this despite the continuing decline in the “wrong side of the tracks”.  I have seen and photographed many aspects of El Cabanyal – the gypsy squats, the now slum housing often with no running water, the Romanian children running happily through the streets.

Beautiful buildings standing in the midst of all this like snubbed queens. There are gentrified roads, and then roads where  grandmas sit knitting outside their chalets while drugs exchange hands a few meters away.

Despite any undercurrent of menace,  it is an enchanting mixture of bohemia and family, student and weekend visitors oozing with atmosphere and character.  Maybe I should say excitement.  There are bars and bodegas and restaurants galore, and eccentric venues such as a diminutive puppet theatre. According to the owner of the watering hole opposite this will be demolished next month along with the square in front.

His building, a former bodega with striking features, already stands forlorn amongst the empty lots, the upper floors  bricked up due to its precarious disrepair.  Not worth fixing of course as it too awaits the swing of the wrecking balls.

And he shrugged again.  Resignation was written all over him.

Not everyone is against the road expansion, and some I ask insist that the demolition will be very limited.  It is hard to know.  Certainly if you look at projected photos in El Pais  the area affected seems large, an ever-widening pizza slice. However, the plans have been altered so often that I doubt anyone knows what the current state of affairs is.  The neighbourhood protest website cabanyal.com is similarly confusing, written in three languages Valencian, Castellon and English…but not really.   Click on a page and the language defaults randomly to Castellon or Valencian, with the latest entry sometimes going back to 2011.  It peters along, not properly updated, as tired as the slew of crumbling houses awaiting their fate.

Something should be done, whether it is the implementation of this hair-brained idea, or, preferably, the definitive suppression of it.  Cabanyals needs to move on for much of it is falling apart at the seams.  At the moment there is no action, only stagnation.  No new building is allowed.  Only the weeds and neglect can prosper.

The Valencians do not seem to care about El Cabanyal, my Italian student told me.  They pass through to sit on the beach and drink sangria in one of the many beach cafes there.  But enter this barrio of charming fishermen houses, a mere 5 minutes walk from the sea and I defy any visitor to be unmoved.

Wander up and down the breathtaking streets, and snap away.  Wet your whistle at any of the numerous bars, and especially at Casa Montana, an atmospheric taverna dating from 1836.  Then, why not? – go to the swanky   beach front Hotel las Arenas and pamper yourself in its spa.

It strikes me that this is the future of El Cabanyal, and actually what much of Spain needs.  Not a motorway to the coast that will fell an unique 18th century fisherman market .  No more golf courses and tacky theme parks. No more high rises.  None of this, but instead the promotion of enlightened tourism. 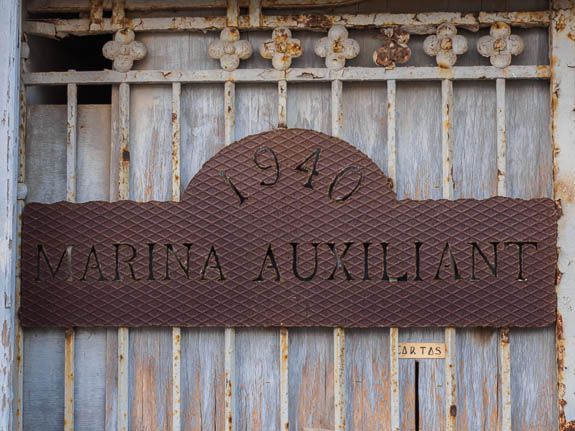 The streets are full of interesting details

Proof of this is that the massive tourist complexes in Spain have actually not been doing so well for the last 8 years.  Just like the 50 year old plan to carve a physical and emotional divide through a truly beautiful area has had its day, so has mass cheap tourism in some fake wonderland lost much of its novelty.  The modern day tourist wants something different of a more authentic quality.  The past preserved in the present is a comforting escape from hectic work schedules and pulls like a magnet.  The comunidad of Valencia has it in buckets and spades, but those who turn the screws seem dumbed by personal ambitions.

As Jason Webster said, “Head for Valencia’s fishermen’s quarter before the bulldozers get there”.  I concur, but would like to add a beacon of hope.  From my investigations it appears that even if they get there, much will thankfully still remain.  But then again, will it?