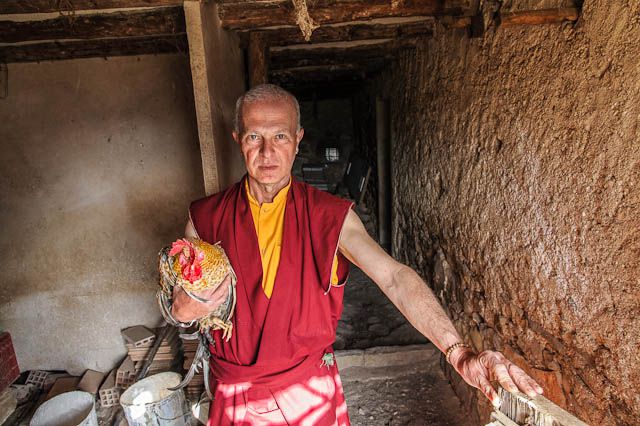 El Maestrat is full of characters that have wandered in from somewhere else.  There is not only your collection of English, Dutch and German ex-pats, but also a wider collection of Spanish ones.  Spanish I hear you say?  Yes, Spanish, for Spain, though supposedly united under Franco, in essence is still a collection of countries with a collection of diverse dialects that are really different languages.  There is the national language, Castellon, which unsurprisingly happens to be the language of the province of Castellon where I live, and then there is the language Valencian spoken in the comunidad of Valencia of which the province of Castellon forms part.

Confused?  Well, think of Great Britain, then think if England, Scotland and Wales, and Northern Ireland, and then of the various counties.  You get the picture.  And like Great Britain, each region identifies strongly with its own, but even more so here, to the point that the local language is taught first in schools, and the national one later.

A Barcelonian is not a Valencian, never make that mistake.  In Atzeneta there are those that belong and then the Spanish from “elsewhere”, and that may mean Galicia or Cataluña or wherever.  Their acceptance by the local community is long and grudging and some say it is an integration achieved with more difficulty than that of an English person.   In fact often they are not accepted at all, simply tolerated.   The same goes for the mountain people beyond the pueblos, of which I now consider myself a partial member.

In the old days it is said that they would have come down to the villages once a week for market looking not unlike the goats and sheep they tended.  The children attended little schools scattered around the mountains until about the age of fourteen and then went to work.  Most of these buildings are now neglected ruins as for some 30 years or so the mountain children have gone to the village schools and later, with government intervention, often board in larger towns in order to benefit properly from the education system.   They return educated and ready to enter main society.  Whatever that means.

Of those that drift into this mountain life, amongst the modern day hippies, the ecologists (they call themselves that but they still drink synthetic beer in the bars) and the “semi-retired” ex-pat on the make, there are people from all walks of life who come with the desire to know the land and culture and live simply away from the more modern world. These people do not tend to build modern houses that corrupt the mountain beauty, and neither do they have the aspiration to drink themselves to death in the local bars.  This is reserved for those who suffer boredom with a life and a people they have not bothered to discover.

Amongst all these personalities there are those who cannot be pigeonholed, such as the Barcelonian John.  A Buddhist of a Japanese sect, he always walks in and out of town.  As normally it is only the old folk with their wide brimmed hats and canes who traipse up and down the caminos tending to their vegetable patches, he strikes an unusual figure.  The only other person I have seen walking is Essex man, who is a regular fixture in the bars and not in possession of a car. Which is just as well given his alcohol intake.

The Buddhist more often than not is carrying a collection of plastic bags that I have always assumed contained his shopping.   I have met him on occasion in Almendros and he only drinks water.  When I first asked him his name he replied “Charles, oh no, call me John, I like the name John”. And so John it was.

John is always very polite and gracious to me, and often holds his hands together in the Buddhist farewell.  I find it very charming.  He says he is a Carer of old people but can find no work. About three kilometers outside the village he has a finca and lives there alone. 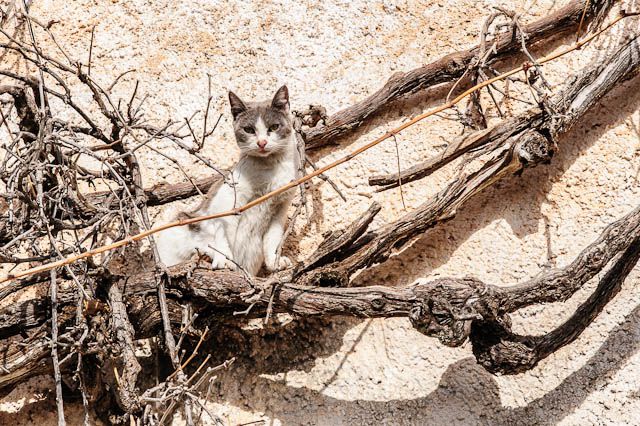 Or so I thought.  For when I came to photograph him, it was apparent that he had ample animal companionship – numerous cats and chickens, including a possessive rooster with a floppy red crown, and a dog that barked insistently with an alarming ferocity, but was thankfully locked up in the house. 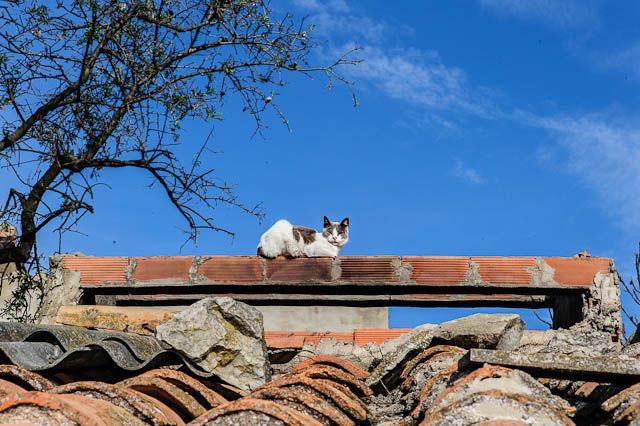 He greeted me at the bottom of his finca, bedecked in his red robes.  There was something intrinsically Japanese about the setting, the twist of the road and the bare early spring tree behind him to the left.  I have seen such forms often in Japanese paintings.  I took his picture before the moment lapsed and then we proceeded up to his masia while he talked with increasing animation.  This was a different John (or was this Charles?) to the person I had met in the village. 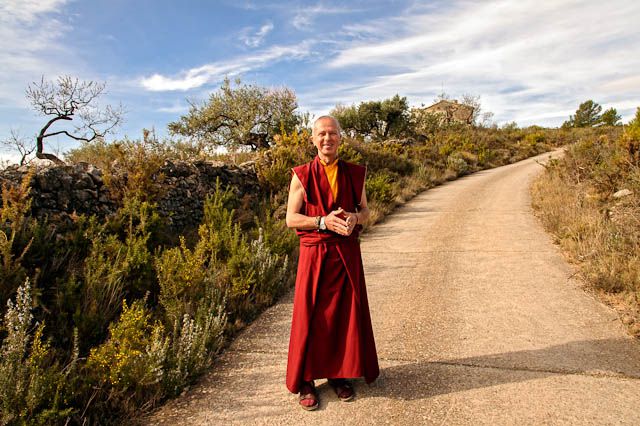 He was agitated, and felt wrongly judged by the local people.  The masia he had bought was in fact part of a terrace of three.  His neighbours do not live there, but pass from time to time to hunt and do not like him.  It was easy to see why.  At the entrance to the property was a large area filled with rubbish, mostly plastic bags leaking their contents.  Why had he not disposed of it?

I thought about the plastic bags he was always carrying up from the village.  Was it possible that he had collected them and the rubbish?  Was this something to do with his beliefs?  I offered, a bit hastily, to take it all away bit by bit in my car. “No,” he quickly said much to my relief, “I will, before I go.  I have to go back to Barcelona to find work.  This is not a good village.” 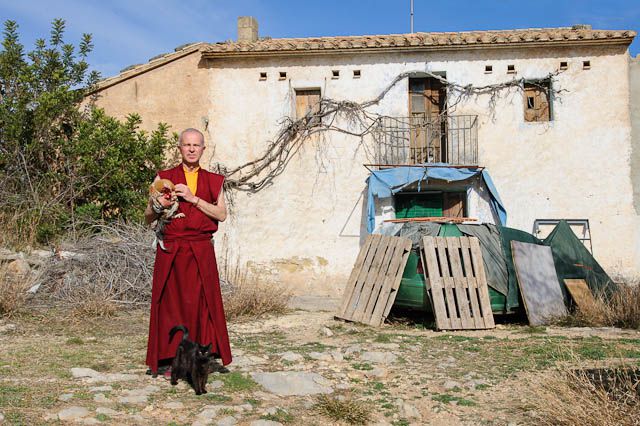 John picked up his rooster and walked to the house, a very handsome building, and I thought it a pity that it was in multiple ownership.  The next time I buy”, John said, it will be in Cataluña, and far from anyone.  I want to be alone.  At that moment the dog started its’ howling, sounding like all the hounds of the Baskervilles together.  It was hard to believe that one dog could make so much noise.  I was sure it could hear it hurling itself against the door.  John turned towards the house and commented ”It is a nasty piece of work, that one’, then, “they don’t understand me in the village,” he said “I have been accused of trying to make money by selling dogs”.   Later I would find out that he offered his puppies for sale at the petrol station.  I do not understand why that is such a crime. 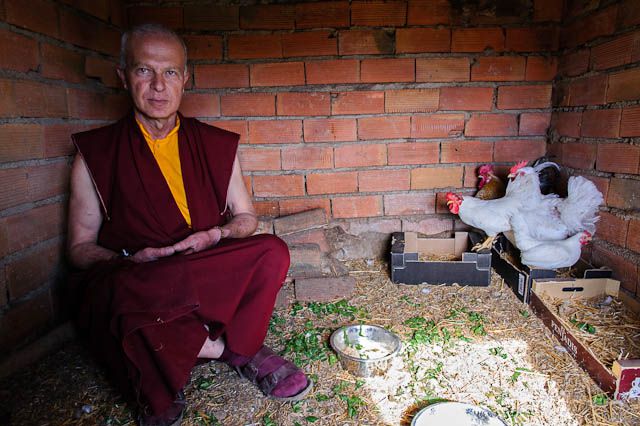 John’s face is very strong.  I asked to take his portrait where he habitually prayed and much to my surprise it was in the hen house.  I joined him there; it was the only way.  As John squatted down it looked like he was laying an egg.  The chickens huddled in the corner worriedly.  Soon I had my shot, more than one, for John is a very good subject, a photographer’s dream.  I thanked him, and then he walked me down the hill, and that is when he revealed his truths in a few sentences.

“My father abandoned us when I was five”, he told me, “my mother and I.  He was a very bad person and I have never seen him again.”  John paused and then rushed on. “He used to beat my mother, I watched and would see the blood pouring out of her.  When my father left, I lived with my grandparents, or sometimes my uncles; I was never in the same house. Sometimes I stayed with my mother but she had four more sons with other men…  I heard that my father is in Columbia now and has six children. I visited my mother last year, but she is lost.”  He paused and looked at me and repeated, “She is lost”.

And then, now that all his grievances and past woes were off his chest, John held his hands together in that prayer way I like so much and backed away from me up the hill. 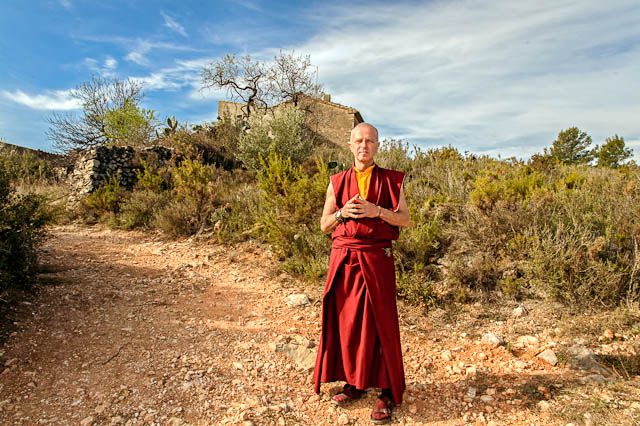