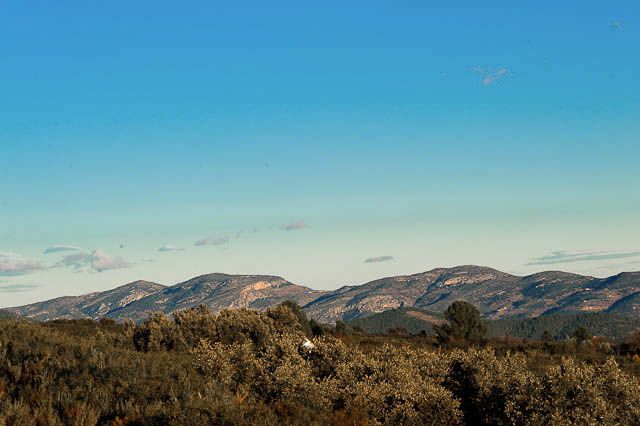 I have been absent, in the UK sorting our boys out for uni and music college. As luck would have it, the weather was glorious by British standards, and it was a lovely respite from the crushing heating of Spain’s August heat. I caught up with friends and clients and had a lively stint on BBC radio (love radio – please give me a permanent job).

Of course I did not catch up enough and then I came back here to Spain. The minute I stood at the top of the airplane’s ambulant stairs, the heat swamped me and I felt a strong need to strip off. By the bottom of the stairs the coat, scarf and sweatshirt had been ditched. Halfway across the runway they came on again as I realised I could not cope with cabin luggage, passport and bits and pieces (being denied a handbag by Ryanair) as well as clothing layers.

It’s amazing how quickly you acclimatise to another place. Once through passport control my layers did not bother me at all, and this despite it being 32 centigrade. By the time I reached the masia I was in heaven. Of course the layers had come off, and as I drove through the mountains, I thought, this is where I belong. The landscape was parched grey by the hottest summer since 1961. From time to time I passed evidence of the fires that raged all summer.  The greyness gave it an uniform monotony. In the monotony was nothing much, just hills and mountains of grey and sometimes ash and the occasional house or ruin, mostly ruins. This is what I loved. I love. How do you explain? 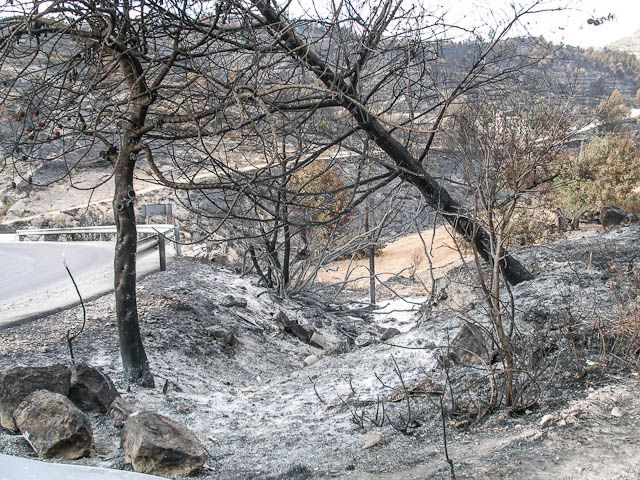 The last leg up to the masia was tainted with worry. How would it be? The land, the progress of the terraces, had it been burgled? Would the house smell dank? Would it be full of African sand from the hot winds? Understand that this is a place I have only recently moved into and it keeps on throwing up surprises. Spain is in a recession, people are desperate, and besides this the workmen have a reputation. That said, I think workmen all over the world have a reputation. As I am having a stream of unconnected thoughts, I might as well be frank.

Am more than broke. We are broke. We owe a great deal to the bank. Everyone I know is in the same position. So in that sense, we are all in this together. It does make it better. I arrived at the masia thinking how will I pay for the latest stage, and how will I continue, and maybe I should return to the UK and go back into proper employment? But the sun was about one hour from setting and the place looked divine and awash with a golden warm September light. And Felix had completed about two thirds of the most amazing hand-hewn stone terrace and I fell uplifted beyond belief.  And sitting outsie with a glass of wine, I mused, maybe I could stay here and right a bestseller instead? 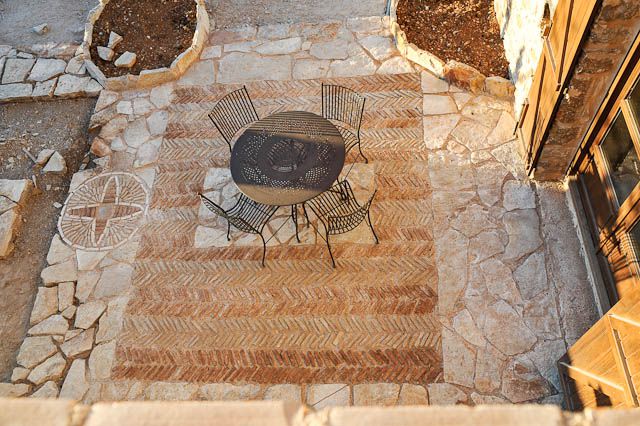 A lot of ands. Beautiful, positive ands. And again I thought – this is where I belong. It all fits into place. The greyness, the bare mountains; the nothingness that nevertheless calls to me.  Besides in the setting light, everything looked full of greens and warmth agai 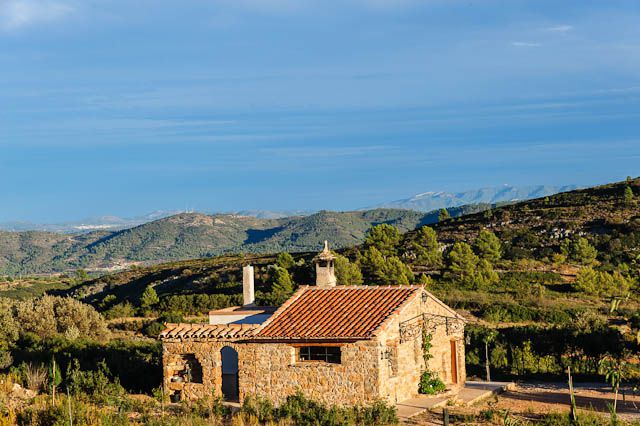 Anyway, I woke up the next day to the sound of Felix pounding away at the terrace. 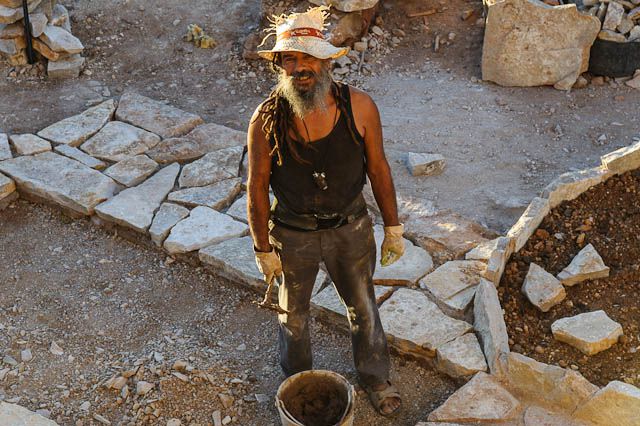 As I was knackered, I dozed back to sleep, on and off for about an hour through the intermittent bleeping of my alarm. Then I heard another vehicle. In the country you hear all sounds distinctly. I poked my head out the window and thought bloody hell, it is the cabinetmaker coming about the French windows and I have not even had a shower!!! I slapped on some foundation, trawled a brush pointlessly across my tangled mop and pulled on whatever clothes were to hand.

So I was found out.

No, I lied, I was working, and I dragged a hand through my frizzled haystack of sun-bleached hair. He smirked and we got on with it. Though he did not smirk too much when I pointed out the error of his carpentry. Haystack hair or no, I can be a tough customer at times. He and accomplice got out two workbenches and proceeded to cut and trim said disasters there and then. Wordlessly. I was quite surprised.

After departure of cabinetmaker, followed un-announced arrival of mayor, town architect, big city architects, my builder, some neighbours and Miguel the ironman, all not expected. In my confusion, aided by two glasses of vino tinto instead of breakfast with Felix and Juan ten minutes earlier  (no food in house), I failed to realise that the mayor’s companion was the town architect (what was up with her hair?) and that I should watch my p and q’s.  Would you like a glass of wine I asked gaily?  Yes, she replied, if you are having one, and so it was that kind of day.

Luckily I had managed to shower and tame my stresses before this invasion, but by the time I cottoned on to who she was and  that hers was a surprise visit to see what naughty stuff I might be up to, it was too late. I had badmouthed just about all the municipality of Atzeneta, including the forest rangers, and no one would be surprised to hear that my goose was cooked. However, it was quite the opposite. At least I hope so. She appeared to take quite a shine to both the masia and my frankness, and I sincerely hope this is the last of it.

As suddenly as they arrived, all my uninvited guests disappeared down the mountain, no doubt “a comer”, leaving in their wake another mountain of dirty wine glasses for me to put into the brand new eco A++++ dishwasher for its initiation.  AND, by the way, it does not work!  At least there is the terrace… 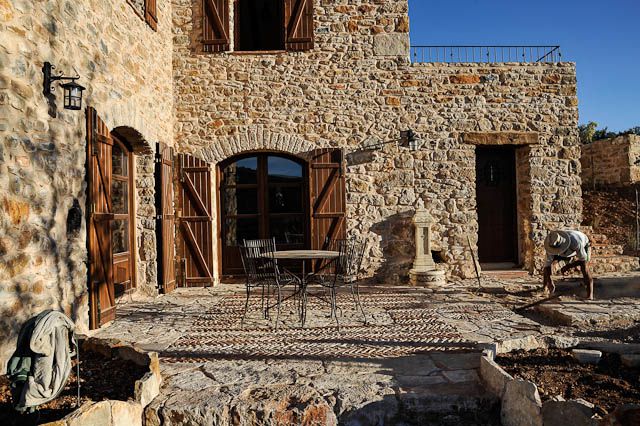