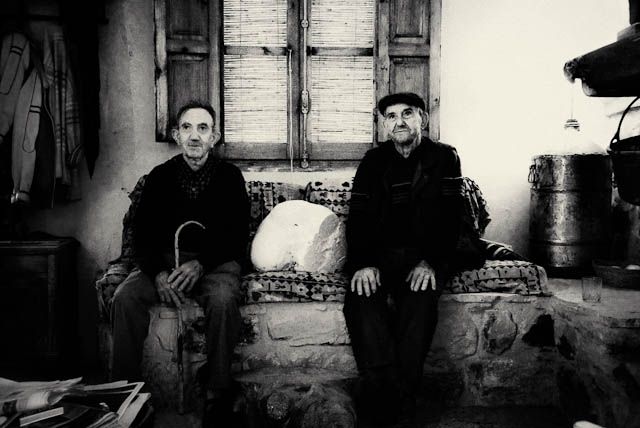 I took this photo four years ago with a Nikon D40x, at the time a pretty decent amateur SLR.  Nowadays the technology has advanced so much that it would be unusable for me, besides this was just a jpeg.

Still, sometimes a photo is powerful enough to excuse technical imperfection, and furthermore, when I look back through my many photo books at old great photos, I am amazed at how “soft” and grainy so many appear next to today’s images.

These were two brothers, and I say two, because one has since died, the one on the right.  His name was Delfin and his brother is Jose.  They had dropped into their neighbour’s house to show off a giant mushroom they had found, that one sitting there between them.  I know it as Langermannia gigantean, or giant edible puffball.  How could I forget? One of my strongest childhood memories is of my family driving past a farmer’s field in America and my mother (who always drove) screeching our dodge to a stop.  Ahhhh she exclaimed, Langermannia gigantean!  And out she jumped, us in tow, and up she scooped these huge things, like white clouds in her arms, and piled them into to back of the dodge, mostly on top of me.

The farmer came by.  This looked like trouble, but no, he thanked my mother for ridding him of some of these, for him, nuisances.  I was too young to know or remember why they were a nuisance, but I have some hazy recollection of cows.

Maybe they made their milk odd?

No matter, we dined of large slabs of them that night and I thought they tasted like lovely, juicy steaks.  It could be that anything cooked in butter tasted like steak in our house because my mother used it so liberally that butter became the dominating taste.

Mother sterilized the rest.  There were a lot after all and these were fresh and white throughout.  Puffballs eventually turn black inside and then they become seriously inedible.   We cooked and salted and bottled for an entire sweaty day. My job was to dip the glass jars in boiling water for two minutes.   My sister dried the jars and my mother ladled the cooked mushrooms into them.  [869 When we came to try a jar one month later it was like being given one of those leather bones to chew, the ones you buy your dog as a treat.  So we chewed and chewed and chewed, and … gave up.  I will have to send an email to mum to ask her why it was such a disaster.  The facts are muddled in my head.

Fernando’s and Carlos’s puffball was one of the rarer ones and that was why they were so proud of it. And also, there is not so much water around these parts so you do not come across fields full of giant white puffballs.  I tried to talk to Carlos the best I could for my Spanish was truly dreadful then, but as things do, we somehow communicated. I was having a truly wonderful time until he asked me if I too remembered the war.

Which war?  I panicked.   I was born long after the war, the war for me being World War II.  Then I realized it was Franco’s war.  That too was a long time ago, but maybe within my life?  No, for the Spanish civil war lasted from 1936 to 1939.  It was Franco who lasted much longer, until his death in 1975.

Did I really look that old to these two brothers?  Now four years have passed and there has been a lot of water under the bridge.  Some days I feel that old, struggling with this off-grid project.  Other days, I feel invigorated by something as simple as a warm welcome from Gema in Bar Sol.  One of the brothers is dead.  Franco is long gone.  But the puffballs remain.  I am beginning to sound like Roald Dahl story.