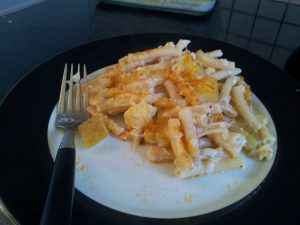 Along with Fondue and Raclette, a  staple in Swiss cuisine is Älplermagronen or Alpine macaroni.  It’s the Swiss version of mac & cheese.

“Älplermagronen: (Alpine herdsman’s macaroni) is a frugal all-in-one dish making use of the ingredients the herdsmen had at hand in their alpine cottages: macaroni, potatoes, onions, small pieces of bacon, and melted cheese. Traditionally, Älplermagronen is served with applesauce instead of vegetables or salad.”

This is so not diet friendly!  I leave out the ham since I’m not a big pork fan. There are numerous recipes out there, but this is the way I do it.

200 g Älpler magronen pasta (or a pasta of your choice)

Alpine cheese (I like a mixture of Emmentaler and Gruyer)

Apple sauce (as a side dish)

2. Cut the potato in chunks and boil until soft.

3. Boil pasta until tender.  In certain regions, a dash of milk or cream is added to the cooking water.

4. Dice onion and sauté in butter until golden brown.

5. Layer the macaroni, onions and potatoes into the prepared baking dish.  Add salt and pepper to taste.  Sprinkle the shredded Swiss cheese over the top, and drizzle milk evenly over the entire dish.  Sprinkle Paprika over the top.  The Swiss are big fans of Paprika.

6. Bake in the preheated oven until the top is golden brown, 15 to 20 minutes.

An American expat, mom, people watcher, and “The Sound of Music” enthusiast who loves to “climb every mountain” in her spare time.