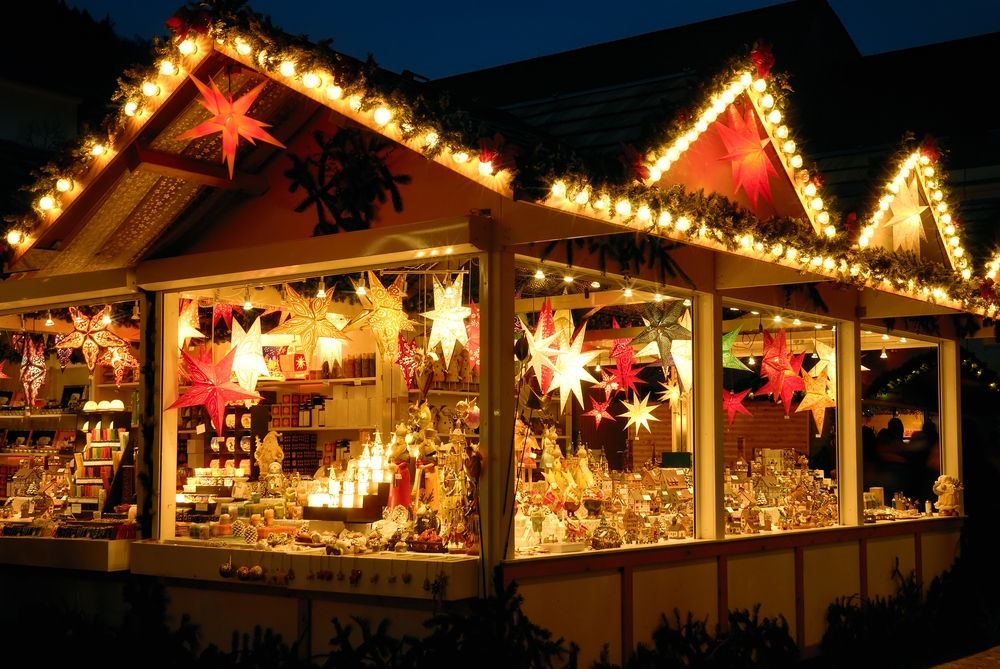 All about the Provençal approach to Christmas (Calena), from the start of the celebration of Sainte Barbe, to the importance of the Santons, the Creche, midnight Mass and the dinner, the Reveillon, which follows through New Year to Shrove Tuesday...

The Christmas season in Provence begins on the 4th of December, the day of Sainte Barbe.

Wheat and lentil seeds are sown in small dishes. These should make fresh green shoots by Christmas Eve, when they are used as table decorations, with ribbon wrapped around the leggy green spouts. They symbolise a good harvest and perfect weather for the new year.

Traditionally, figurines, called Santons (little saints), are sculpted of wood, clay or pastry and carefully dressed or painted to represent various traditional professions, such as the baker, the fishmonger, the wine merchant, the simpleton, ravi and the shepherd, with a sheep over his shoulders. Also represented are farm animals and the biblical characters of the three kings (which only go into the crèche at Epiphany), and Joseph and Mary.

Santons appeared for the first time at the Christmas fair in Marseille in 1803, and fast became popular.

The Christmas crib, or crèche is an important decoration, traditional to the region from as early as the 17th century, though some rumours have it that, in 1223, St Francis of Assisi made the first memorial crib, sparking a tradition in Italy and Southern France.

According to legend, Jesus was born in Provence and the crèche represents the village at the time of his birth. Traditionally, the crèche would be decorated with moss, bark, pine cones, stones and thyme collected from the country, but these days, there are markets, selling ready made Santons and crèches.

Decoration of the house and the Christmas tree, the Sapin de Noël are important and it is believed by some children that if the tree is not well-decorated, Père Noël will pass them by.

The idea of the tree, decorated with fruit, paper ribbons and flowers came from Alsace, then part of Germany, in the 14th century. It is said to have been introduced by Princess Hélène de Mecklembourg, on her marriage to the Duke of Orléans, heir to the French throne.

Père Noël is the Father Christmas, or the Santa of French children. Children believe that Père Noël, and his companion, Père Fouettard travel from house to house, to assess their behaviour and reward good children with presents. Père Fouettard might spank the bad children. Children put their shoes at the fireplace and Père Noël fills them with gifts.

The Christmas festivities last for three days, from the 24th to the 26th December and contain a series of traditional celebrations.

La Reconciliation: Since about 1602, there has been the tradition that each family will visit their "enemies" and "ask for pardon" for any annoyance that may have occurred during the year. This has evolved into a tradition where one calls on friends to wish them santé.

Le cacho-fio: Before the feasting begins, there is the traditional cacho fio, the lighting of the fire. There are regional variations to this tradition, but generally, a large log from a fruit tree, usually olive or cherry was lit by the youngest and oldest members of the family, and sprinkled with mulled Christmas sweet wine, vin cuit, salt and bread crumbs and then carried, three times, around the Christmas dinner table. Words were uttered, encouraging health, prosperity and goodness to the home for the forthcoming year. The fire was kept burning until the New Year.

Le gros souper (big meal): Christmas Eve is celebrated with, hymns, poems and much food. Before the Midnight Mass, the celebrations begin with the gros souper. Traditionally, the whole family is present. The table is laid with three white cloths layered over each other and three white candles, symbolising the Holy Trinity. The sprouted lentils and wheat, tied with ribbon and sprigs of myrtle decorate the table. In some parts, places are laid for the poor and for parents who have died. Traditionally, the table would remain set for the three days of celebration, so that the angels may also enjoy the feast.

The thirteen deserts: In 1920, the thirteen deserts entered popular tradition. These represent Jesus and the twelve apostles at the last supper. These deserts include "the beggars", symbolizing the Religious Orders of the Franciscans, the Dominicans, the Augustins and the Carmelites and are dried figs, nuts, dried raisins, and almonds. The rest are generally apples, pears, dates, plums, fruit sweets, quince jelly, dried fruits, white and black nougat, and fondants. And then there is the traditional pompe à l'huile (brioche made with olive oil and flavoured with orange blossom water or lemon peel). These are served with the sweet wine.

The remains of the meal were left at table, the Part du Pauvre (poor person's share). The myth behind this custom is that the food is left for the ancestors and angels, who came in the night to enjoy the celebrations.

Midnight Mass is celebrated with the singing of Provençal and religious carols and the procession of the shepherds. The shepherds pull a cart of lambs towards the altar, as an offering to the baby Jesus, although this custom less common now.

Christmas presents are either opened on Christmas Eve, or on the morning of Christmas morning, after Père Noël has been to visit. The children are put to bed before the adults begin the next phase of celebration.

After Midnight Mass on Christmas Eve, people gather in their homes or in restaurants for a meal, Le Réveillon. This was originally a simple snack, but over the centuries, it has grown in lavishness, although, in more recent times, it is often eaten on Christmas day. The menu varies from region to region, but commonly served are specially prepared walnut, orange and peach flavoured aperitifs, followed by a variety of roasts and game, accompanied by Provençal wines This is followed with fruit paste, local chocolates and liqueurs, and the traditional Büche de Noël, a log shaped rolled sponge cake, with a creamy filling and chocolate coating. This has replaced the traditional Yule log.

On Christmas day, the godfather must bring his godson a rooster shaped cake, and his goddaughter, a doll shaped cake. This meal usually begins with chopped turkey heart and kidneys, celery and black olives. It is followed with goose or turkey, with chestnuts and ham. Ending with chicory tart and a tray of goats' cheese, and home made liqueur.

The New Year is celebrated with more feasting. A stuffed, roast cock is served, with twelve partridges, thirty black truffles and thirty white eggs. Each of these has a symbolic value: the cock, for the year ahead, the twelve partridges for the twelve months, and the eggs and truffles for the days and nights of the months.

The first Sunday of January is Epiphany, in many ways, the end of festivities. It marks the day the three kings were to have reached the baby Jesus, and it's the day the santons of the kings are put into the crèche. A Galette, sometimes replaced by a brioche in the shape of a crown sprinkled with crystallized fruit, is prepared in their honour.

Shrove Tuesday and Chandeleur, at the beginning of February, mark the true end of the festive period.