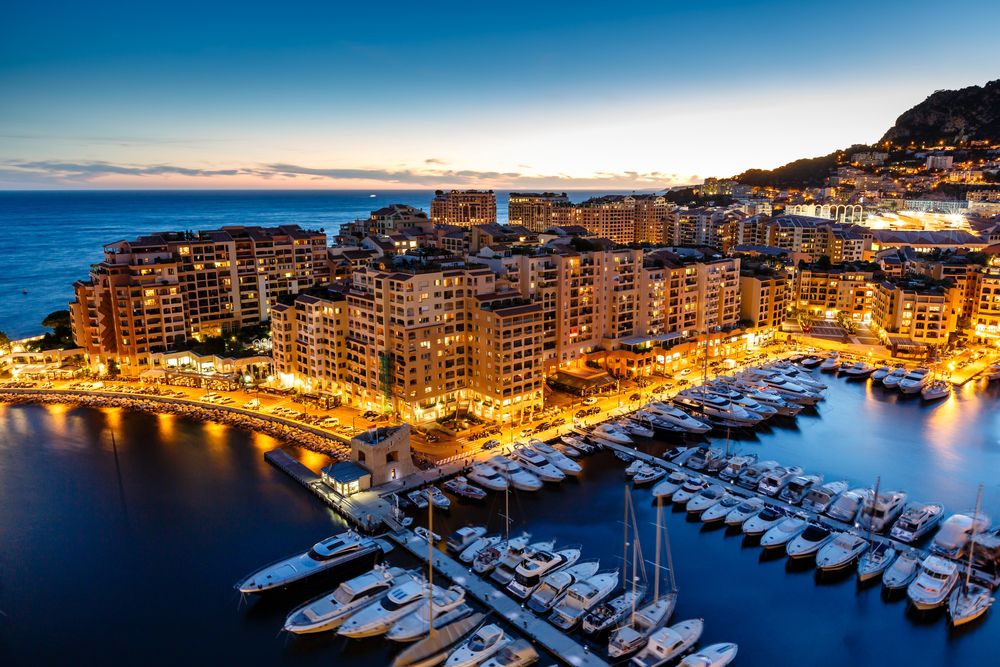 The Principality of Monaco is a sovereign city state, located on the French Riviera in Western Europe. It is surrounded by the French department of Alpes-Maritimes and the Mediterranean. It has an area of 1.98 Km2, making Monaco the second smallest independent state in the world (after the Vatican). The Principality is divided into four areas: Monaco-Ville, the Condamine, Monte-Carlo and Fontvieille.

Monaco is not part of the EU, although due to its close ties with France it participates in the EU customs territory, and there are no border formalities crossing to and from France.

With an area of just under two square kilometres extending from the slopes of the Maritime Alps to the Mediterranean shore, the city-state of Monaco is simultaneously the world’s second-smallest country and its second most densely populated. Situated near the Italian border on France’s south-eastern coast and surrounded on three sides by France, Monaco is a point of geographical and cultural convergence.

The city was founded as a Genoan colony in 1215. Monaco’s royal family first appear in Monegasque history in 1295, under the banner of Francesco Grimaldi, during the long period of conflict between the Guelphs and the Ghibellines on the Italian peninsula. Grimaldi, known as “Il Malizia” (“the guileful one”), disguised himself and his troops as a party of monks and took the castle by surprise, an event immortalised on Monaco’s coat of arms. Prince Albert II, the current ruler of Monaco, is his descendant.

Il Malizia was later evicted, but the Grimaldis reasserted their hold over Monaco in 1419 when they purchased it from the Aragonese. In 1612, under threat from Spanish forces, Honore II declared his principality a vassal or independent tributary of France in exchange for French protection, thus establishing Monaco’s long-standing relationship with the French state. The Grimaldi hold on Monaco was disrupted by the forces of the French revolution in 1793, but they were able to return to power in 1814 – only to become a protectorate of the Kingdom of Sardinia in 1815 at the Congress of Vienna. Though Sardinian rule only lasted until 1860, Italian remains one of the most widely-spoken languages in Monaco.

In 1860 the Grimaldi family relinquished control of the towns of Menton and Roquebrune, which represented the vast majority of Monaco’s territory, in exchange for four million Francs, and its sovereignty was recognised by France in the Franco-Monegasque treaty of 1861. Excessive taxation in Menton and Roquebrune had caused civil unrest, paving the way for the introduction of Monaco’s famous tax policy: an income tax of zero percent for all residents, a rate facilitated by the success of the Monte Carlo casino. Established in 1854, the casino had been intended to provide a much-needed flow of revenue for the Grimaldis, and remained the dominant source of Monaco’s income until the expansion of its international banking industry in the late 20th century. With the success of the casino came the Monte Carlo Opera House, Oceanographic museum, and tourism and jewellery industries.

A constitution was established in 1911 after the 1910 Monegasque Revolution, and the finances of the state became officially separated from those of the Grimaldis. The constitution allowed the royal family to retain effective power over the country, to the point where the reigning prince was able to suspend the constitution during the First World War. The succession crisis of 1918 permitted France to negotiate much greater influence in the external affairs of Monaco, and eventually saw the illegitimate daughter of Prince Albert I, who was a cabaret singer, become Princess Charlotte - who then ceded her powers to her son. The son, Prince Rainier III, became known for turning Monaco into an international hub of finance and business, and he married the American actress Grace Kelly in 1965. Their son was crowned Prince Albert II in 2005.

Monaco is a constitutional monarchy: the Prince is the head of state, and appoints a Minister of State (Ministre d’État) to preside over a six-minister Council of Government. The Prince shares his power of veto with the unicameral National Council, a democratic body which consists of 24 members – 16 of which are chosen by first-past-the-post voting, and 8 of which are chosen by proportional representation. The two major political parties in Monaco are the centre-right Union for Monaco (Union pour Monaco) and the conservative National and Democratic Union (Rassemblement et Enjeux pour Monaco).

Monaco may be the world’s second-smallest nation, but its GDP per capita figures feature among the world’s highest. It has one of the largest proportions of cross-border workers within the European Union, and a zero percent rate of unemployment. Its economy is the product of its geography and history: the size of the principality does not permit land-heavy industries, and Monaco’s historically turbulent relationship with taxation led it to abolish income tax. This makes it an attractive prospect for international finance, and European banks are very well-represented in the city.

The nation’s economic strength was built on the fortunes of Monte Carlo Casino, and tourism and gambling are traditional industries. Under the reign of Prince Rainier III, Monaco saw an explosion in activities relating to banking and finance. In 2004, owing to its secrecy legislation and generous tax regime, the OECD identified Monaco as a tax haven.

Healthcare in Monaco is state-owned, and utility companies are owned by the state and operated by the private sector.

Monaco has warm and dry summers, and is cooler in winter with occasional rain. Continual sea breezes keep the city cool by comparison with other Mediterranean countries. July and August are the hottest months, and October and November the wettest.

With a force of around 500 police officers in total, Monaco has the highest per capita police presence in the world. The Monegasque army, at around a fifth of the size of the police force, serves as a royal guard and assists the police and emergency services with their regular duties.

The UK’s Foreign and Commonwealth Office (FCO) rates the risk of travelling to or living in Monaco as low. Street crime is rare in Monaco, though bag thefts have been known to occur at nearby Nice airport.

Foreigners and Tourism in Monaco

Monaco has a diverse and well-heeled foreign community, with many expatriates attached to international business concerns. English, German, and Italian are widely spoken in addition to French and Monegasque.

Monaco has an extensive tourism sector, centring on the Monaco Grand Prix, the Monte Carlo Casino, and the Opera House. Many locations in the south of France and the north of Italy are within relatively easy reach by car, and the food and climate of the French Riviera attract many visitors.