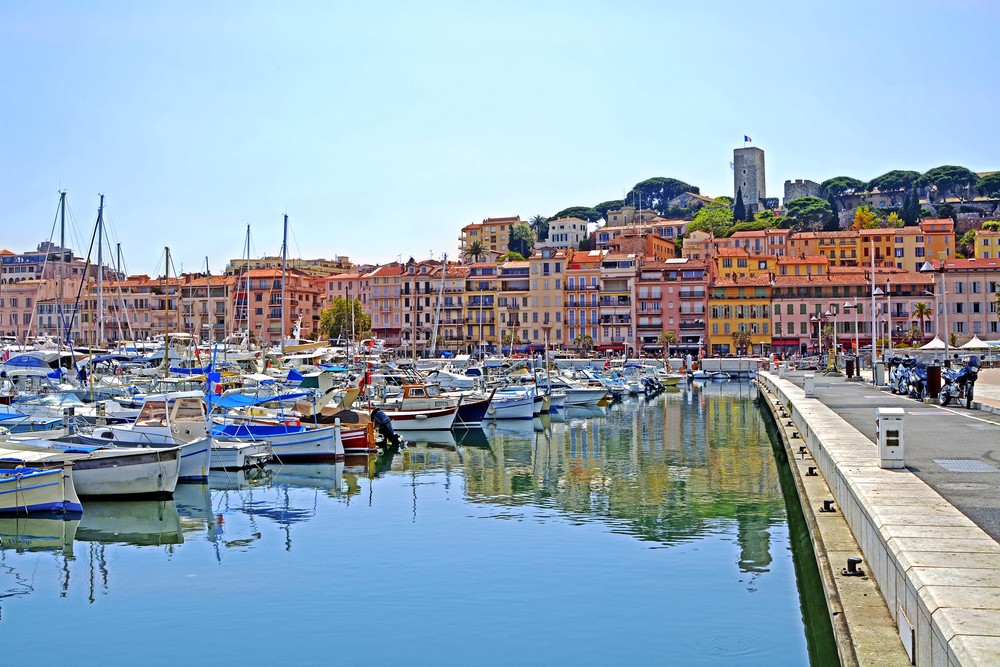 All the information you need about Cannes if you are planning a move or are already living there. Get details about the different neighbourhoods in Cannes, things to do, schooling, transport and where to go for all administration procedures...

Cannes is the second largest town on the Riviera after Nice and is famous worldwide for its annual film festival. Associated with the rich and famous, for its luxury hotels and restaurants, its seafront Croisette lined with palm trees, Cannes is a popular tourist destination with over 300 days of sunshine a year, sandy beaches and many big events, festivals and fairs.

Cannes’ economy is essentially based around tourism, business fairs and the film festival which attracts thousands of visitors every year.

Quartiers, or areas of Cannes

The old town of Cannes, le Suquet, is a lively and popular area, although much of the accommodation is essentially short term and holiday rentals. La Croix des Gardes, Palm Beach and Californie are the main residential areas, slightly on the edges of the town with a choice of either luxury apartment blocks as well as small and large villas.

Super Cannes is the most expensive part of Cannes, offering amazing views over the bay, the Cap d’Anitbes and the islands. It is more peaceful than the centre of the town, and this is reflected in house prices, which are at a premium.

The very centre of town, in between the main road (La Voie Rapide) and La Croisette is referred to as ‘La Banane’ and many holiday rentals and secondary residences can be found here. It can be quite noisy, especially in the ‘Carré d’Or’ part where there are many late-night bars and restaurants. It has the advantage of being within walking distance of everything, from the shops and beaches to the train and bus station.  As soon as you cross over the Voie Rapide, property prices are lower, and there are many nice areas (for example around the Stanislas school and in Petit Juas), suitable for families or young people, all still within walking distance of the centre.

Republique is also a slightly cheaper part of Cannes, but recent renovations in the area have led to rising property prices. Just north of Cannes is Le Cannet, which is cheaper than Cannes itself (although annual ownership tax is considerably higher). West of Cannes is Cannes-la-Bocca, which is considerably cheaper than Cannes, but may become more popular and attractive, with the construction of the new university there, planned to open in 2018.

Cannes’ nearest airport is Nice Côte d’Azur Airport, the third busiest in France and easily accessible at 26 kilometres from Cannes centre, operating flights worldwide including several major UK destinations. There is easy access to the airport via the Airport Xpress bus, which leaves from the Hotel de Ville, by the old port.

Cannes-Mandelieu Airport, 5 km west of Cannes, has no scheduled flights and is essentially used as a gateway for private and business aircraft.

There are 2 main bus centres; one is situated outside the SNCF railway station, and the other is next to the Town Hall. Urban buses are operated by Palm Bus, including a night bus service. In the summer, there is a free minibus service between La Bocca and the beaches.

City Palm is a green diesel minibus with a circular route from the Mairie along the Croisette, the rue d’Antibes and the SNCF railway station. It stops on demand as well as at bus stops. An electric bus operates from the town hall to the Suquet.

Regional buses are operated by Lignes d’Azur and run between Cannes and most towns in the region, including Nice, Grasse and Antibes.

Taxis in Cannes are expensive, especially at night, and it’s wise to check the fare beforehand.

The closest university is the Université de Nice Sophia-Antipolis, and is a popular destination for foreign students.

Cannes is famous for its luxury boutiques, many situated on the Croisette. The rue d’Antibes, just behind the Croisette, is more diversified, with a mixture of designer and high street shops. Local artisan and souvenir shops can be found in the old Le Suquet area and the pedestrian rue Meynadier.

Noteworthy museums in Cannes include the Musée de la Castre in the old Suquet area of town, which houses a diverse collection of exhibits from regional musical instruments to 19th century Provençal art, the Musée de la Mer or Maritime Museum on the Ile Ste Marguerite, contemporary art venues, the Espace Miramar and Galerie La Malmaison, the Chapelle Bellini Museum and the Villa Domergue.

The islands off Cannes, the Iles de Lérins, are also a popular tourist destination. The Ile de Saint-Honorat houses a fortified monastery and the Ile Sainte-Marguerite boasts the fortress where the Man in the Iron Mask was held captive. Boat trips run regularly between Cannes and the islands.

Of course, Cannes has many high-end, high-priced restaurants but there are a number of more modest establishments – amongst them local bistros specialising in regional specialities to be found in particular in the old town and around the port.

Beach restaurants open for the season from about April to November, and some are open for lunch all year round.

Cannes has a lively nightlife with many pubs, clubs and bars ranging from the local to the luxurious. There really is something for everyone. Much of Cannes’ nightlife is concentrated on rue Commandant André and surrounding streets between the rue d’Antibes and the Croisette, referred to as the Carré d’Or. The Suquet is also very popular in the evening, and is also a very gay-friendly part of town.

Children and Activities for Kids

Cannes’ seafront offers children’s activities, with carousels and playgrounds, Fun City is close by in Cannes-La-Bocca and the beaches also offer watersports and sailing activities.

Much paperwork is carried out at the Préfecture des Alpes-Maritimes in Nice or the Sous-Préfecture de Grasse including car registration, driving licences, residency cards, naturalisation and assistance to foreign students.

Opening times depend on the service you require and can be found on the website. Many procedures can also be dealt with online. Contact details for the Prefecture can be found on our Administration page.

Cannes’ Mairie offers its own free collection service for the removal of large objects. You will need to make an appointment by calling Allô Mairie +, who will collect from your address.