The Euro - Everything You Need to Know About The Netherland's Currency 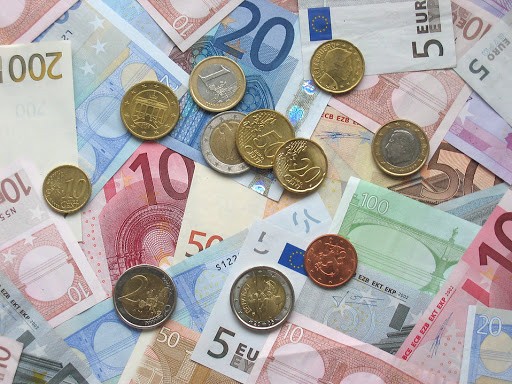 Information on the Euro denominations, exchange rates and currency transfers...

The Euro – everything you need to know about Netherlands’s currency

Are you sending money to or from Netherlands to pay a foreign mortgage, purchase property, cover living costs or support loved ones?

If you need to make currency transfers for any of these reasons you’ll need to understand the Euro, exchange rates and how international payments work.

In this guide we’ll tell you everything you need to know.

If you’ve never handled Euros before, here are the different denominations you’ll come across.

What a difference a rate makes

Whenever you transfer money abroad exchange rates will make a difference to how much you get for your money.

If you’ve had experience with exchange rates you can go ahead and skip this section, but if you’re new to the wonderful, if sometimes confusing, world of currency here’s a quick overview of what exchange rates are and why they’re important.

An exchange rate is the value of one country's currency vs. that of another country. Most exchange rates are free-floating and will rise or fall based on supply and demand in the market.

So if you had Pounds but wanted Euros the GBP/EUR exchange rate would tell you how many Euros you would get for each Pound.

Even a seemingly small discrepancy in the exchange rate can make a big difference if you’re buying Euros, and the difference becomes more pronounced when you’re transferring larger amounts.

As you can see, securing the right exchange rate for your currency transfer is key!

Fun(ish) fact... All Euro coins have a common side showing the denomination (value) and a national side showing an image specifically chosen by the country that issued it; the monarchies often have a picture of their reigning monarch, other countries usually have their national symbols.

Exchange rates can move by as much as 5% in a matter of days during periods of heightened volatility (political shifts, economic crises etc.) but if we look back over 10 years you can see just how much rates can change.

Over the course of a decade the GBP/EUR exchange rate traded at highs of 1.52 and lows of 1.06. 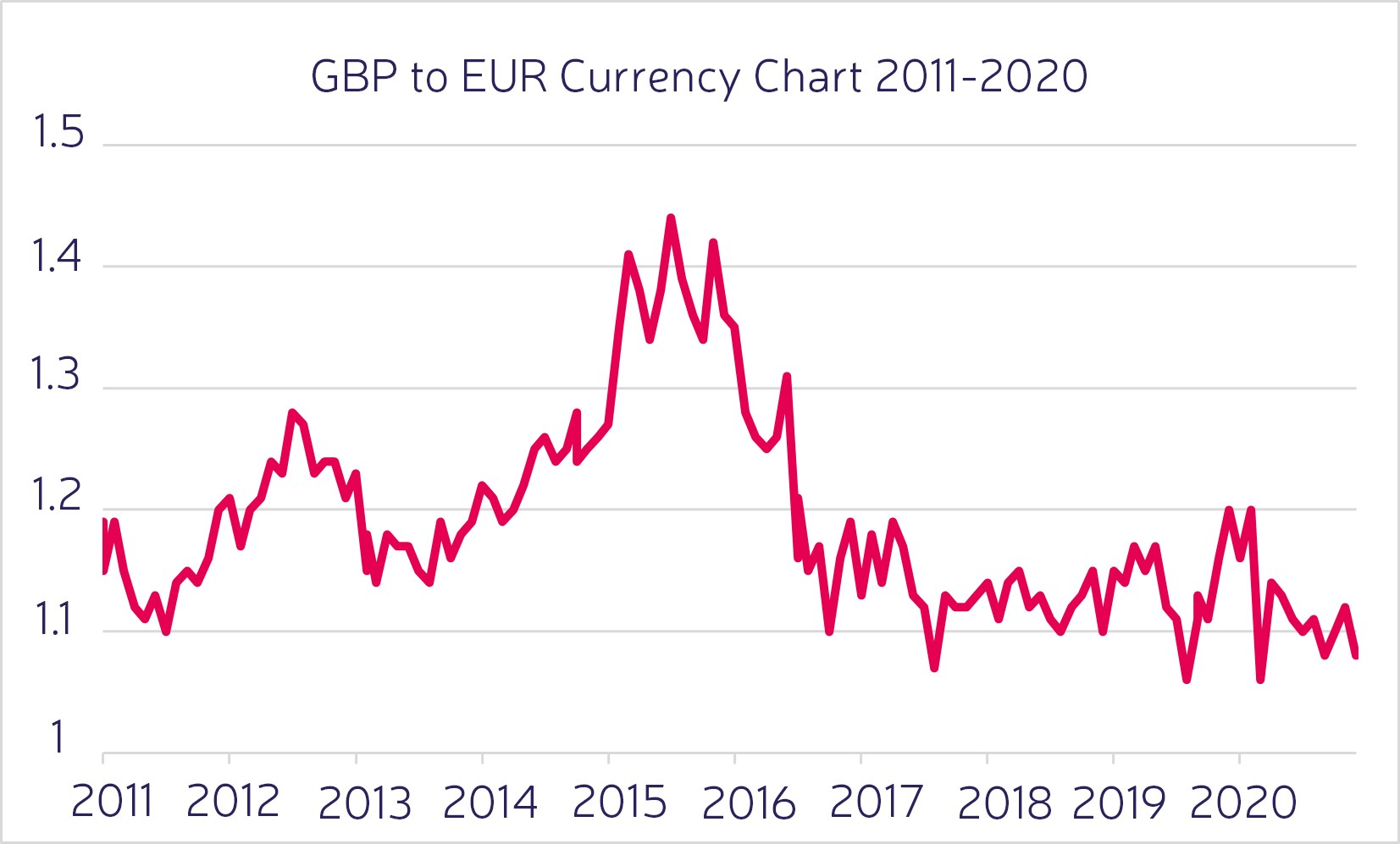 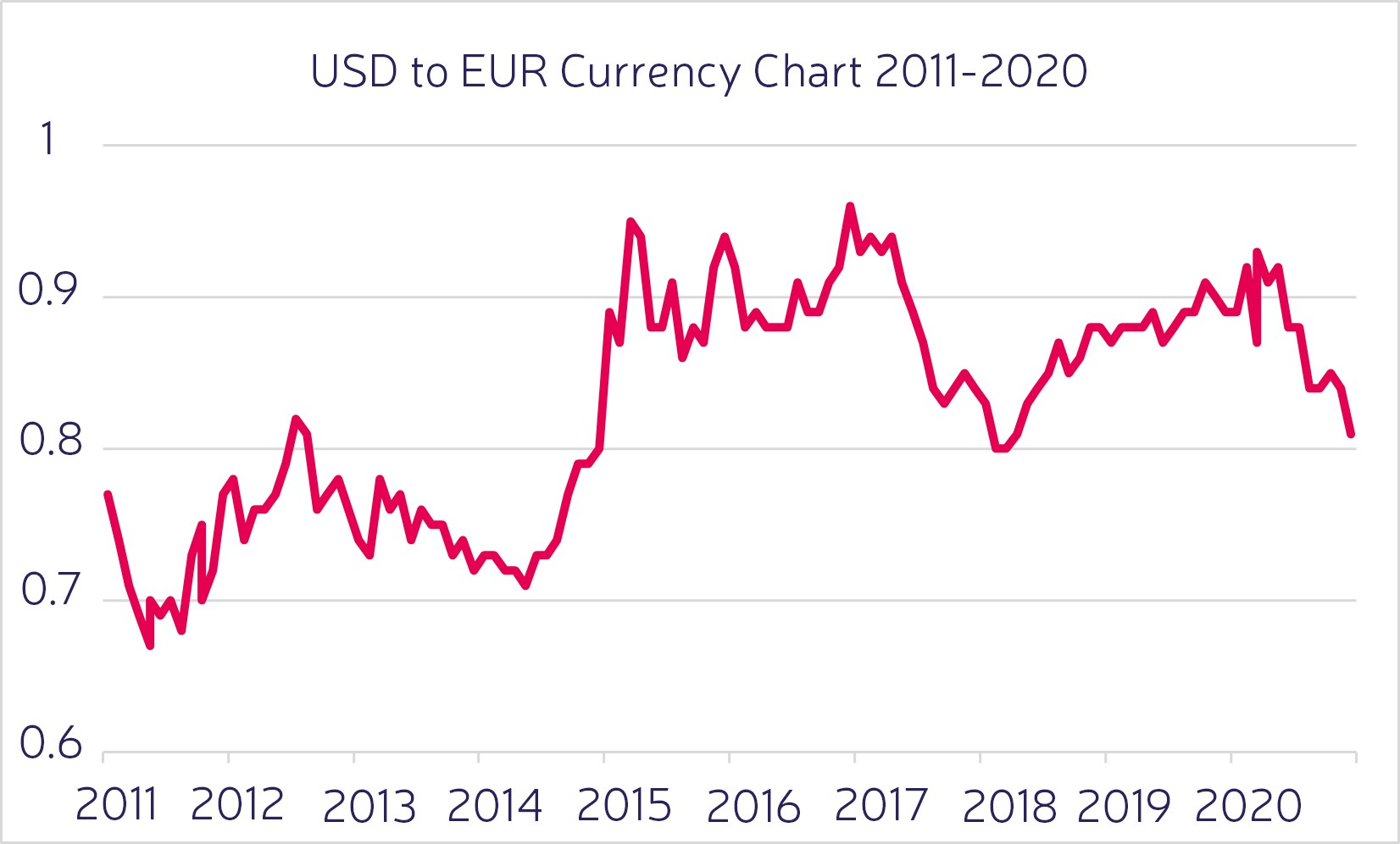 These graphs show that the GBP/EUR exchange rate is slightly weaker now than it was in 2011 (meaning you’d get fewer Euros for your Pounds) while the USD/EUR exchange rate has strengthened over the last decade.

Fun(ish) fact... The symbol for the Euro is the Greek letter epsilon (E) with two horizontal lines: €. Some people see it as the Latin capital letter C with an equal sign (=).

So we’ve established that Euro exchange rates can move quite a bit. But what causes them to move?

Different things cause movement in different currencies, but there are several drivers for EUR fluctuations.

The European Central Bank (ECB) governs monetary policy in the Eurozone. The ECB meets every six weeks (eight times a year) and their gatherings are followed by a policy announcement. If monetary policy remains unchanged the impact on the Euro is minimal, but if monetary policy is changed (or the central bank hints that it will be changed in the future, known as forward guidance) the Euro can experience fairly dramatic movement.

Currency transfers to and from Netherlands

1.     Be cautious of interbank exchange rates – rates quoted online are often the ‘interbank’ rate. This is the rate at which banks and financial institutions buy currency and is not available to private individuals or businesses.

3.     Find out more about currency transfer services like limit orders and currency wallets (more on that below!)

4.     Don’t leave it until the last minute – make sure to keep an eye on exchange rates in the weeks and months before you want to make an exchange, this will increase the odds of you securing a good exchange rate.

If you need to transfer money to Netherlands there are a number of services you can use to help you get more for your money.

How long do currency transfers to Netherlands take?

The speed of your currency transfer will depend on the provider you use and the countries/currencies involved. A GBP/EUR transfer should typically take between 24-48 hours, although it can be same day if you have funds on account.

Is transferring money to Netherlands safe?

As long as you use a reputable provider your transfer should be safe and secure. Look for a well-established currency provider who’s regulated by the right bodies and has good online customer reviews.

How much do currency transfers to Netherlands cost?

If you use a bank to move money to Netherlands you may be charged a transfer fee. This can be a flat rate or a percentage of the transfer amount.

Some specialist transfer providers don’t charge anything outside of the exchange rate they quote, and as they work on smaller margins than banks you’ll receive a more competitive rate.

What is a margin and how does it affect my exchange rate?

Banks and other large financial institutions buy currency at the interbank exchange rate and add on a ‘margin’ before selling it on to consumers. The larger the margin applied the less competitive the exchange rate, and the less you’ll receive.

How much can I transfer to Netherlands?

Again this depends on the provider you use, but many have no upper transfer limit when it comes to moving money to Netherlands.

This information has been provided by TorFX

If you need to move money to or from Netherlands our currency partner TorFX can help.

TorFX have been offering their customers great exchange rates, no transfer fees and personal account management since 2004.

Get a quote now to find out how much you could save.

You can also create an account with them in two minutes online or over the phone. Once you’ve created an account you’ll be able to check live exchange rates 24/7 and make fast, hassle free currency transfers.