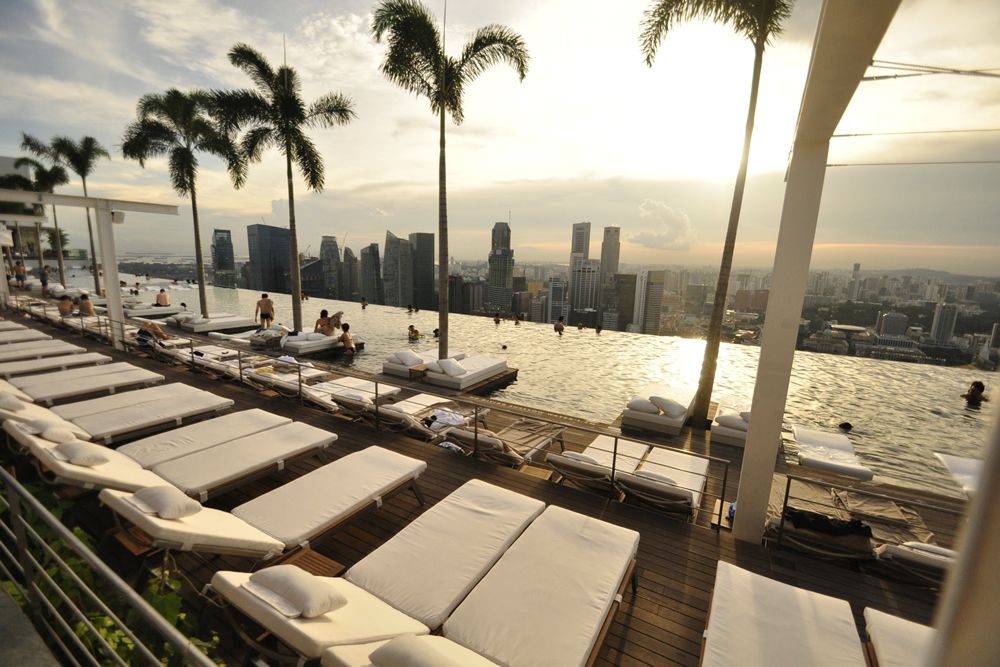 Singapore lies one degree north of the equator, and with 63 islands has a total land area of 778 square kilometres and a coastline of 193 Km. It is separated from Malaysia by the Straits of Johor, and from Indonesia by the Singapore Strait.

Over the past centuries, land reclamation projects have removed some natural islands as well as creating new ones. There are no natural lakes in the country but man-made reservoirs have been built for fresh water.

Mainly low-lying at an average of 15 metres above sea level, Singapore's highest point is Bukit Timah Hill, at approximately 165 metres. Around 23 percent of the country's land mass is made up of forest and nature reserves.

The northwest of the country is dominated by hills and valleys while the areas to the east are sandy and flat.

Singapore is not prone to damage from seismic activity and effects are limited to minor tremors and the small swaying of buildings and objects.

The Port of Singapore is one of the five busiest in the world.

According to the Sejarah Melayu or Malay Annals, Singapore was founded in the 13th century by the prince of Srivijay, Sang Nila Utama, after reportedly seeing a lion and naming the area after the Malay word for Lion City, Singapura.

Records show that the Mongol Empire made contact with the area in 1320 at a place called Long Ya Men, which is thought to be modern day Keppel Harbour. Chinese traveller Wang Dayuan, and a Javanese poem also reported a small settlement in the area called "Temasek".

Following a struggle between Siam and the Majapahit Kingdom over control of the Malay Peninsula in the 14th century, Singapore became an important trading post. Between the 15th and 19th centuries the area was part of the Sultanate of Johor until conflicts with the Portuguese saw the settlements on the island destroyed.

In 1819, Sir Thomas Stamford Raffles arrived in Singapore looking for a place for the British to site a new port.

The area was ruled by the Dutch controlled Sultan of Johor, while the rightful ruler, Tengku Hussein, lived in exile. Raffles smuggled Hussein back to Singapore where he offered British support and payment in exchange for the right to a trading post. A formal treaty was signed on 6 February 1819, which saw the birth of modern Singapore.

In 1824 the British took control of the island through a second treaty that promised to pay a lifelong amount in exchange for administrative rights and collection of port taxes. Later that year, Singapore along with Penang and Malacca were legally assigned to the British East India Company in the Straits Settlement. By 1825, the population exceeded 10,000 and the trade volume was over $22 million.

Further boosts to worldwide trade such as the opening of the Suez Canal, the opening of the Chinese market and the production of steam ships all aided Singapore's growth. By 1880, over 1.5 million tonnes of goods were passing through the port annually and over 100,000 people lived on the island.

Although thriving, at the end of the 19th century, Singapore had numerous social problems including gangs, prostitution, drugs and gambling. With only 12 police officers to the city's population of 60,000 the merchant community became disenchanted with the British rule. As a response, the British recognised Singapore as a Crown Colony and sought to address the numerous social problems facing the area.

Singapore had little to no involvement in the First World War but had its port upgraded to house the entire British Navy after the conflict. Heavily defended and with enough resources for the Navy to operate from, the upgraded port was completed in 1939 in response to Japanese aggression.

On 15 February 1942, during the Second World War, Singapore was captured by the Japanese and 130,000 British, Indian and Australian troops were taken prisoner.

After the war, the British re-took control and the economy started to recover. In July 1947 separate Executive and Legislative councils were established with elections held the following year.

In the first elections there were six seats available and only British subjects were allowed to vote. Three months after the elections an extreme left-wing group called the Malayan National Liberation Army challenged British rule in what has been termed the Malayan Emergency. In response, the British passed the Internal Security Act which allowed any person deemed to be a threat to security to be arrested and detained for up to two years without trial.

The second Legislative council elections in Singapore took place in 1951 and the number of seats was increased to nine. The colonial SPP won the majority of the seats. In 1953 Sir George Rendel proposed a limited self-governance for Singapore with 25 out of 32 seats chosen by the electorate. The election in 1955 saw more political parties involved than ever before. The electorate was automatically registered and voters totalled over 300,000 in number. The Labour Front was the party with the most seats, winning ten of the 25 available.

Under the Labour Front and its leader David Marshall, social tensions ran high with a number of high profile riots. Marshall appealed to London for a greater degree of autonomy but London refused citing a concern over communist influence in the area. Marshall resigned and was replaced by Lim Yew Hock. The new Chief Minister immediately began a crackdown on communist and leftist groups under the Internal Security Act. In 1957, impressed with the actions of the new government, Britain agreed to self-governance and a state of Singapore was declared in the State of Singapore Act in August 1958.

Elections for the new expanded Legislative Assembly were held in May 1959 and PAP leader Lee Kuan Yew became the first Prime Minister of Singapore.

PAP leaders believed that Singapore's future lay with a merger with Malaya. On 9 July 1963, Singapore, Malaya, Sabah and Sarawak established the Federation of Malaysia.

Tensions between the PAP ruling party of Singapore and UMNO, the ruling party of Malaya ran high almost from the outset. Each participated in each other's elections despite a prior agreement not to and the Chinese population in Singapore felt discriminated against following a number of preferential laws biased to the Malays.

Following several political killings and riots over the next couple of years as well as restrictions placed on the economically stronger Singapore by Kuala Lumpur relations broke down. Singapore was formerly expelled from the Malaysian Federation on 9 August 1965 and Singapore became a republic.

Singapore joined the United Nations and the Commonwealth in 1965, co-founded the Association of Southeast Asian Nations in 1967 and was admitted to the Non-Aligned Movement in 1970.

Singapore is a parliamentary republic with a Westminster system of representative democracy. Voting has been compulsory since 1959 and the legal age is 21.

Executive power lies with the cabinet, which is led by the Prime Minister as head of government and the President as head of state. The President holds a largely ceremonial role but does have the power to veto certain decisions.

Legislative decisions are made by parliament. Members of Parliament are elected by a first past the post system. The President is the head of Parliament.

Singapore runs a judicial system based on English common law system. There are a few differences to the British system, however, with trial by jury being abolished in 1970.

Singapore has a highly transparent, market economy with an estimated GDP of $251.5 billion. It has a relatively low tax rate compared to other developed economies and has one of the highest GDP per capita rates in the world. Along with Hong Kong, Taiwan and South Korea, it is considered one of the "Four Asian Tigers". As of August 2010, Singapore was one of the fastest growing economies in the world at 17.9 percent.

Singapore depends upon exports such as electronics, refining, chemicals, rubber, processed food and drink, life sciences and mechanical engineering. It is one of the top three oil-refining centres in the world.

It is the fourth leading financial centre behind London, New York and Hong Kong and is the world's fourth largest foreign exchange trading centre.

Singapore's economy is based on manufacturing and services. The industrial side of the economy constitutes 26.8 percent of GDP while the service sector makes up the remaining 73.2 percent. It has a highly skilled workforce as a result of its successful education policy. Unemployment stands at a relatively low figure of 2.2 percent of the total workforce of around 3.1 million.

According to the World Bank Ease of Doing Business Index, Singapore is the easiest place in the world to do business and it is home to more dollar millionaire households per capita than any other country.

The unit of currency is the Singapore Dollar.

Singapore has an equatorial tropical rainforest climate with a relatively uniform temperature, rainfall and pressure.

The temperature in the country averages at a high of 31 degrees C and a low of 24.1 throughout the year. May and June are the hottest months; however, December as the coldest month has an average temperature of 29.9 degrees C.

Singapore has high levels of humidity with high rainfall throughout the year. The most rainfall occurs during the monsoon season in November, December and January. It has an average of 177 rainy days a year and an average yearly rainfall of over 92 inches. The driest months are June and July with 13 rainy days and around 6.3 inches of rainfall in the month.

There are few safety concerns in Singapore but it is always advisable to check before travelling and to observe and respect all local laws. The crime rate in the country is considered one of the lowest in the world. Singapore practises capital punishment for serious offences such as drugs trafficking, murder abduction and weapons offences.

Singapore is rated amongst the least corrupt countries in the world according to Transparency International.

Of the 5.18 million people in Singapore, 64 percent are Singapore citizens and 36 percent are permanent residents or foreign workers. Due to a declining birth rate amongst the local population, the government has sought to encourage migration to the area. The total number of immigrants in Singapore as a percentage of total population is the sixth highest in the world.

In 2009, the population of Singapore was made up of 74.2 percent Chinese, 13.4 percent Malay, 9.2 percent from Indian descent and 3.2 percent were Eurasians or from other groups.

Tourism forms a large part of the Singapore economy with over 11.6 million people visiting the country in 2010 (excluding Malaysian visitors coming over the Causeway and Second Link bridges).

In recent times, tourists have been attracted to the island by medical tourism with around 200,000 foreigners seeking medical care in Singapore each year.

Other attractions in the area include the cultural Singapore Food, Garden and Arts Festivals, Singapore Zoo and Night Safari, the Singapore Grand Prix, eco-tourism, and famous landmarks such as Raffles Hotel. Other lures include the legalised gambling casino resorts (Integrated Resorts) of Marina Bay Sands and Resorts World Sentosa, as well as the Tiger Sky Tower.

Find reputable companies for products & services in the Singapore Angloinfo Directory through our local business listings.