Cars collection of HSH the Prince of Monaco

27th October 2021 All Day
Will repeat every day 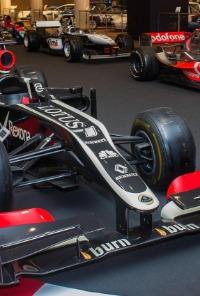 Located on the Terrasses de Fontvieille, this remarkable exhibition brings together almost a hundred cars of all ages, produced by the top European and American manufacturers, as well as six coaches belonging to H.S.H. Prince Rainier III of Monaco.

In the late 1950s, Prince Rainier III, who was passionate about cars, began to collect vintage vehicles. Over the years, as acquisitions were made, the collection grew and very soon the garage at the Prince’s Palace proved too small to house the hundred or so beautiful cars, some sporty, others statuesque in silhouette, with their majestic bodywork, gleaming bonnets and regal grilles!

And so in 1993, Prince Rainier III decided to unveil his treasures to the public.

This exhibition, covering an area of 5,000 m2 and unlike anything else in the world, features a collection of some one hundred cars, from the 1903 DE DION BOUTON to the 2013 LOTUS F1, not forgetting makes and models such as HISPANO SUIZA, ROLLS ROYCE, LINCOLN, FACEL VEGA, DELAGE, DELAHAYE, PACKARD, HUMBER, NAPIER, FERRARI, MASERATI, LAMBORGHINI, ALFA ROMEO, the LEXUS from the 2011 Royal Wedding, and more. Also on display are race cars which have competed in the Rallye de Monte-Carlo and the Monaco F1 Grand Prix.